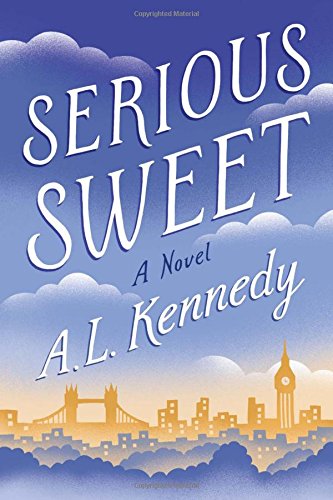 We are in the final stretch with the shortlist announcement coming up soon. Friday we’ll be posting a list of our thoughts reading the list and some of our favorites. Saturday we’ll post our panel’s predictions for the shortlist. Book number 11 for our shadow panel is Serious Sweet by A.L. Kennedy. Three of our judges read this book. Here are our mini reviews and ratings…

Note: Thanks to Amazon publishing for providing us with a review copy of this book in exchange for an honest review.

Synopsis (from Amazon): A good man in a bad world, Jon Sigurdsson is fifty-nine and divorced, a senior civil servant in London who hates many of his colleagues and loathes his work for a government engaged in unmentionable acts.

Meg Williams is a bankrupt accountant—two words you don’t want in the same sentence, or anywhere near your résumé. She’s forty-five and shakily sober, living on Telegraph Hill in London, where she can see the city unfurl below her.

Somewhere out there is Jon, pinballing around the city with a cell phone and a letter-writing habit he can’t break. He’s a man on the brink, leaking government secrets and affection for a woman he barely knows as he runs for his life.

Poignant, deeply funny, and beautifully written, Serious Sweet is about two decent, damaged people trying to make moral choices in an immoral world, ready to sacrifice what’s left of themselves for honesty and for a chance at tenderness. As Jon and Meg navigate the sweet and serious heart of London—passing through twenty-four hours that will change them both forever—they tell an unusual and moving love story.

Jen’s Review: I have generally really liked A.L. Kennedy’s works and have loved some of her other books. Unfortunately, this time around I had a very inconsistent reading experience — liking it one minute, bored the next minute. There were some moments of hilarity, moments so funny that I laughed to the point of tears. But these moments were interspersed with moments of tedium, streams of consciousness focused on political musings that left me sleepy. There’s no question that Kennedy is a skilled writer and her talent shines through in the writing of this book.  Sentences are clearly expertly crafted and flawlessly executed.

I don’t generally like stream of consciousness so take my review with a grain of salt. I found the switching from stream-of-consciousness to 3rd person narrative to be distracting and this style broke up the storyline for me in a way that left me feeling disconnected to the characters. I liked the idea of flawed characters working their way closer to each other over the course of the day. Yet I often found the characters excessively whiny and hard to connect with.

Finally, it was a clever, well-written concept but it wasn’t particularly original. Half of all literary fiction is about flawed characters and a good chunk of those involved ways in which these flawed characters come to find each other. A book written in stream-of-consciousness with a plot that takes place over the course of a 24 hour period – sound familiar to you? It’s all that I could think about when reading this one. So, I deducted a few points for originality.

In sum, I felt very conflicted about this book. I didn’t particularly enjoy it as a whole but I loved parts. I did appreciate the moments of brilliance and the strong writing. Some sentences were dazzling and I highlighted quite a few passages. I also liked the ending quite a bit, especially with the way Kennedy brought in the meaning of the smaller vignettes interspersed throughout the book. Here are my ratings:

Book Worm’s Review: Like Jen I struggled with reading this. Unlike Jen it was not because I found it boring, but because I found the characters alien to me and I could not envision how they could possibly be bought together. In fact I think they would have both been better of having never met, and that is not a good thing in a “romance”.

I actually thought the switches between stream of consciousness and third person narrative were clever and worked well. I also liked the seemingly random chapters about life in London that were interspersed between the main narratives and how they eventually tied into the central narrative.

The writing is good, but as Jen says the subject is not that original and I have deducted points for that, I have also deducted a point for overall enjoyment as I never really felt emotionally connected with the characters.

Kate’s Review: I started out enjoying this book even though, as a rule, I don’t care for stream of consciousness.  I don’t mind flawed characters, in fact they are usually far more interesting than their more successful self-assured counterparts.  However, after a hundred pages or so I started to feel like everyone was wallowing in self-pity and soul-crushing anxiety.  By around page three hundred I was starting to think of Jon with some of the same dismissive terms employed by his unsavory co-workers.  I’m not proud of this, but to be fair the self-hate was getting really annoying.

It was fairly obvious that our two tortured souls are destined to at least try to find one another and any other plot twists were minor complications. The slow reveals of information about our primary characters was effective development even though it really didn’t make me warm to them.  In fact that only character in the whole book that I believe I’ll remember fondly was Hector the springer spaniel. There were portions of the writing that I enjoyed so much that I too was moved to highlight them, but strangely unlike Jen most of these were Jon’s musings on the current state of world politics and civility.

This is my eighth book on the longlist, and least favorite so far. It was the only one that felt like work to read.

Want to try it for yourself? You can buy your copy here: Serious Sweet

We want to hear from you! Have you read this book? What did you think? Do you plan on reading this book? Does it deserve to make the Man Booker Shortlist?