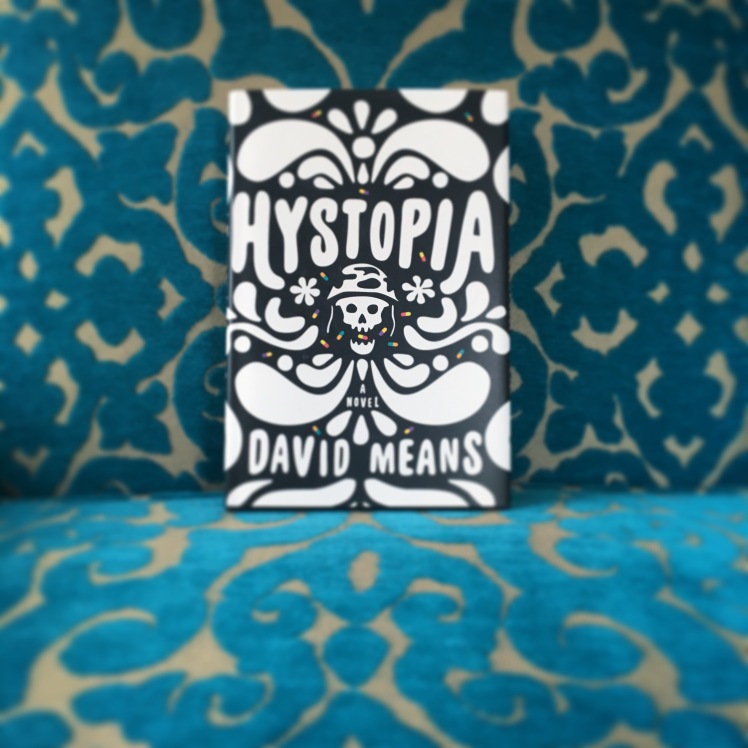 Next up for our Man Booker shadow panel is Hystopia by David Means. This brings us past the half-way point on the list with a little over two weeks left before the shortlist announcement. Four of our judges read this one. Check out what we thought of this nominee. Does it rank in the top half for us?

Note: Thank you to Farrar, Straus, & Giroux for providing us with review copies in exchange for our honest reviews.

Synopsis (from Amazon): At the bitter end of the 1960s, after surviving multiple assassination attempts, President John F. Kennedy is entering his third term in office. The Vietnam War rages on, and the president has created a vast federal agency, the Psych Corps, dedicated to maintaining the nation’s mental hygiene by any means necessary. Soldiers returning from the war have their battlefield traumas “enfolded”―wiped from their memories through drugs and therapy―while veterans too damaged to be enfolded roam at will in Michigan, evading the government and reenacting atrocities on civilians.

This destabilized version of American history is the vision of twenty-two-year old Eugene Allen, who has returned from Vietnam to write the book-within-a-book at the center of Hystopia. In conversation with some of the greatest war narratives, from Homer’s Iliad to the Rolling Stones’ “Gimme Shelter,” David Means channels the voice of Allen, the young veteran out to write a novel that can bring honor to those he fought with in Vietnam while also capturing the tragic history of his own family.

Outlandish and tender, funny and violent, timely and historical, Hystopia invites us to consider whether our traumas can ever be truly overcome. The answers it offers are wildly inventive, deeply rooted in its characters, and wrung from the author’s own heart.

Kate’s Review: I grew up hearing the conventional wisdom that if John Kennedy had not been assassinated the United States would not have become as deeply embroiled in the Vietnam War.  In this alternative history novel set within an alternative history, Means seems to posit the exact opposite, that had Kennedy survived that initial assassination attempt he would have doubled down on our Southeast Asian misadventure.

It is unclear how much of what occurs in Hystopia is “true history” and how much merely exists within the embedded novel written by returning vet Eugene Allen.  The introductory notes and comments that open the book merely add to the reader’s confusion and disorientation.  It took me quite a while to tease out who was who despite a theoretical introduction of the cast of characters.

In the Hystopia universe the President courts danger while surviving multiple assassination attempts as the nation spins into violent chaos of arson and rioting.  Returning vets are so deeply damaged that the government sets up a quarantined zone encompassing most of the state of Michigan where reprogrammed, “enfolded” vets are soft-released after treatment that can involve wiping out most of their memories to eradicate the trauma induced by their war experiences.

Unfortunately, the enfolding is not 100% successful.  The failures can be spectacularly violent.  The narrative switches back and forth from a rampaging violent vet, his reluctant accomplices, and the enfolded government agent of the Psych Corps charged with locating and stopping him.

The book was strongly reminiscent of Philip K. Dick at his strangest, but I mean that as a compliment. I only gave it 1 of 2 points for enjoyment because it was far too violent and bleak for my tastes.

Jen’s Review: I struggled quite a bit with the beginning of this book due to the violence and confusion over what was happening and who was who. I was pretty convinced that I was going to hate the book and in fact I emailed Kate (after she had read it) and asked her to reassure me, without giving away her scores, that it was going to get better and easier to read. She did and it did. Ultimately the book ended up being one of my favorite books on the longlist, it is certainly one of the more memorable books. In my “real” life I am a psychologist and I work with military Veterans, many of them Vietnam Veterans. So the topic of the book was one of interest to me. The notion of how people are impacted by, and cope with trauma, is an interesting one and it is something that Means explores by pushing things to their limit.

I loved how the author uses the concept of a book within a book to raise questions about the accuracy and psychological meaning of events described in the “fake” book. Means first confuses and disorients his readers then wraps things up by making us think about which elements of the embedded book were linked to the psychological mindset of Eugene Allen, the fictional author of this embedded book and a trauma exposed Veteran himself. In a way, the fictional book is a psychological character study of the fictional author. An author we never truly meet because he is deceased before we open the book.

I found the book to be very well-written and extremely original. I’ve never read anything quite like it and once I got into the heart of it, I found it quite clever. I subtracted half a point for enjoyment because I did find the initial violence to be hard to tolerate and not exactly enjoyable to read but I truly loved other parts. I also deducted a point for character development since I felt that the focus on the traumas and recovery of memories overshadowed the ability for me to truly understand the various facets of different characters’ personality and some characters were fairly extreme.

I agree with the judges who included this book on the list. I think it was a brilliant book and it deserves a place on the longlist. It’s one I will be keeping an eye on for my shortlist predictions.

Book Worm’s Review: Like Jen I really struggled with the early part of the book, not due to the violence, but due to confusion. It took me ages to work out who was who, and who was speaking at a particular time. For me there were 3 story lines: the storyline featuring Rake, the storyline with the Corps agents, and finally Eugene’s story. While they were all tied up at the end of the book, I didn’t feel it was enough pay off for the struggle early on in the book.

In our normal rating this would have been a 3 star read for me. It passed the time well enough, but I was never really invested in any of the characters on an emotional level. The points I have allocated, put this more at a 4-star rating and that is due to how original I found the story to be.

This is a well written book it just didn’t appeal to me.

Nicole’s Review: And then we came to the end … This is one of those books that can only be fully appreciated by getting to the end.  It’s complex!  I was so confused in the beginning and distracted by the fact that it starts out with an Editor’s Note which states that certain historical facts have been twisted to fit the fictive universe, and then goes on to say that one of those “facts” is that JFK had 7 attempts on his life, and the “Genuine Assassination” happened in September in Illinois.  That’s not a spoiler, it’s like the first page.  The point of this comment is that the beginning takes concentration and I don’t recommend this on audio, which is what I did.  The audio was well done, but I had to rewind so many times I can recite parts by memory.

This is a SUPER creative look at the Vietnam War, and trauma in general.  The characters were kind of hard to distinguish one from the other.  That may have been partly the audio, but I don’t think so.  I’m a bit in awe of the sophistication of this book, and absolutely see why it is nominated for the prize.  For me, however, I appreciated it far more than I enjoyed it.  It’s not something I would have read if not for this panel, and I’m glad I did.  In fact, now that it’s done I feel like I should go back and read it to catch what I missed.  (I felt much the same with last year’s winner  A Brief History of Seven Killings.)

Want to try it for yourself? You can buy your copy here: Hystopia

We want to hear from you! Have you read this book? What did you think? Do you plan on reading this book? Does it deserve to make the Man Booker Shortlist?