The French Lieutenant’s Woman by Fowles 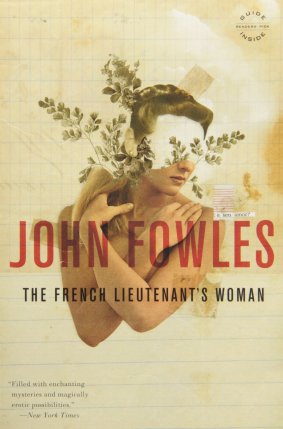 Synopsis (from Goodreads): The scene is the village of Lyme Regis on Dorset’s Lyme Bay…”the largest bite from the underside of England’s out-stretched southwestern leg.” The major characters in the love-intrigue triangle are Charles Smithson, 32, a gentleman of independent means & vaguely scientific bent; his fiancée, Ernestina Freeman, a pretty heiress daughter of a wealthy & pompous dry goods merchant; & Sarah Woodruff, mysterious & fascinating…deserted after a brief affair with a French naval officer a short time before the story begins. Obsessed with an irresistible fascination for the enigmatic Sarah, Charles is hurtled by a moment of consummated lust to the brink of the existential void. Duty dictates that his engagement to Tina must be broken as he goes forth once again to seek the woman who has captured his Victorian soul & gentleman’s heart.

Jen’s Review
4 stars
I have avoided this book for many years due to my own misconceptions. I don’t typically enjoy reading romance-heavy novels because I find them formulaic and overly simplistic. I had assumed that this novel was a Victorian style romance. Boy was I wrong. I really enjoyed this book and I’m glad that others encouraged me to pick it up. First off, I loved the writing style which I found witty and at times unexpectedly snarky. Fowles injects himself into the novel, critiquing various elements of Victorian society with significant humor. For example, there is this passage (which goes on for a few pages):

What are we faced with in the nineteenth century? An age where woman was sacred; and where you could buy a thirteen-year-old girl for a few points — a few shillings, if you wanted her for only an hour or two. Where more churches were built than in the whole previous history of the country; and where one in sixty houses in London was a brothel (the modern ratio would be nearer one in six thousand). Where the sanctity of marriage (and chastity before marriage) was proclaimed from every pulpit, in every newspaper editorial and public utterance; and where never- or hardly ever – have so many great public figures, from the future king down, led scandalous private lives [page 267].

I wouldn’t quite call this a feminist book, although the author has been known to make this claim, because the main female character is never given her own voice. However, it is feminist leaning in that Sarah is a strong, independent, and intelligent woman who fails to conform to Victorian gender ideals in a magnificent way. The French Lieutenant’s Woman is not a sappy romance novel where the weak-willed woman falls in love with the strong gentleman and they all live happily ever after. Instead, it is more commentary on Victorian society (and its hypocrisy) and  an analysis of gender and class restrictions than it is a romance. I highly recommend it.

Book Worm’s Review Unlike Jen I don’t mind romance stories. Sometimes there is nothing better than getting lost in happily ever after, however this book is not your traditional romance and like Jen I really enjoyed it because of that.

Jen has covered the main points that make this a great book I will just add that I love the way the author interjects and turns what you have just read onto its head. This really is at least 2 books in 1.

Want to try it for yourself? You can find it on Amazon here: The French Lieutenant’s Woman

Read Around the World: England

Our next stop in our world tour or reading is England, home to Book Worm and Jen’s childhood home from ages 2-12! Join us as we explore a tiny fraction of what England has to offer in terms of literature and find out which book we selected. This will be one destination where we hope you help us compile a list of favorite authors and novels!

END_OF_DOCUMENT_TOKEN_TO_BE_REPLACED

In the 18th century Nicholas Dyer, an architect, and secret devil worshiper, is commissioned to build seven London churches. In the 1980s, detective Nicholas Hawksmoor is investigating a series of gruesome murders that took place in the sites of those same seven churches. Hawksmoor alternates between the two time periods and Ackroyd uses different styles to reflect “modern” day language and 18th century language. As the story progresses, readers begin to piece recognize patterns and connections between the two periods.

Nicholas Dyer is loosely based on real life architect Nicholas Hawksmoor (I wish I had known this prior to reading the book – notice the overlapping names of characters) who worked with Sir Christopher Wren (also mentioned in Ackroyd’s book). The real Nicholas Hawksmoor was a free mason who incorporated pagan symbols into his churches and did in fact build the 7 churches mentioned in the book. The Guardian published an interesting piece on Hawksmoor and his churches. Scroll down the bottom of this review to see images of the 7 churches.

Let me begin by saying that audio is the wrong format with which to tackle this book. The book is confusing, the author jumps around between time periods, some names are similar across time periods, and the narrator does not do a good job of distinguishing between voices.

Now on to my review… END_OF_DOCUMENT_TOKEN_TO_BE_REPLACED

Love it or Hate it: Atonement

Have you ever noticed how some books seem to drive a wedge between people? You check the reviews and find almost no middle-of-the-road ratings. Instead people either seem to love it or hate it. Well, welcome to the new Love it or Hate it post category! Each month, we’ll pick one book to review. Two contributors will battle it out to convince you to pick it up or throw it out. Our February book is Atonement by Ian McEwan.

Special thanks to guest contributor Nicole R for writing one of the points of view this month!

Make sure to read to the end and cast your vote. And to celebrate our first Love it or Hate it category we are giving away a gently used copy of the book to one randomly selected person who writes in with a comment saying “I want it.” END_OF_DOCUMENT_TOKEN_TO_BE_REPLACED