Her Body and Other Parties by Carmen Maria Machado

Having just finished this book a few days ago, I can understand why it’s getting such mixed reviews from readers. People seem to either love or hate this book. As someone who doesn’t typically love short stories, I was skeptical about this book but Carmen Machado made me a believer. Here’s why.. END_OF_DOCUMENT_TOKEN_TO_BE_REPLACED

The Pier Falls and Other Stories by Mark Haddon

Out today, The Pier Falls is Mark Haddon’s latest book. Although I was cutting it down to the wire, I was able to finish and review the book before leaving for Book Expo America. Hope to see some of you there. Here’s what I thought of the book: END_OF_DOCUMENT_TOKEN_TO_BE_REPLACED

Pricksongs and Descants by Coover 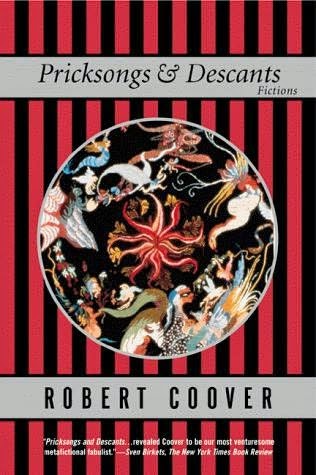 Pricksongs and Descants by Robert Coover
Published in: 1969
Reviewed by: Jen and Book Worm
Find it/Buy it here: Pricksongs & Descants

Synopsis (from Amazon): Pricksongs & Descants, originally published in 1969, is a virtuoso performance that established its author – already a William Faulkner Award winner for his first novel – as a writer of enduring power and unquestionable brilliance, a promise he has fulfilled over a stellar career. It also began Coover’s now-trademark riffs on fairy tales and bedtime stories. In these riotously word-drunk fictional romps, two children follow an old man into the woods, trailing bread crumbs behind and edging helplessly toward a sinister end that never comes; a husband walks toward the bed where his wife awaits his caresses, but by the time he arrives she’s been dead three weeks and detectives are pounding down the door; a teenaged babysitter’s evening becomes a kaleidoscope of dangerous erotic fantasies-her employer’s, her boyfriend’s, her own; an aging, humble carpenter marries a beautiful but frigid woman, and after he’s waited weeks to consummate their union she announces that God has made her pregnant. Now available in a Grove paperback, Pricksongs & Descants is a cornerstone of Robert Coover’s remarkable career and a brilliant work by a major American writer.

Book Worm and I feel very differently about this book. Keep reading to find out who loved it and who hated it. END_OF_DOCUMENT_TOKEN_TO_BE_REPLACED 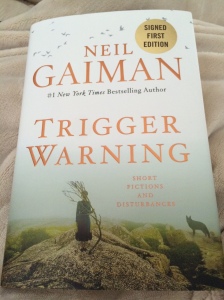 Trigger Warning is a Gaiman’s most recent collection of short stories that cuts across genres and includes horror and ghost stories, science fiction, fairy tales, and poetry. The collection includes a never before published American Gods story, a Doctor Who tribute, a Sherlock Holmes story, a retelling of Sleeping Beauty, and a thematic companion to The Ocean at the End of the Lane. The book also contains an interesting introduction by the author where he discusses the meaning of the title and background on each story.
END_OF_DOCUMENT_TOKEN_TO_BE_REPLACED