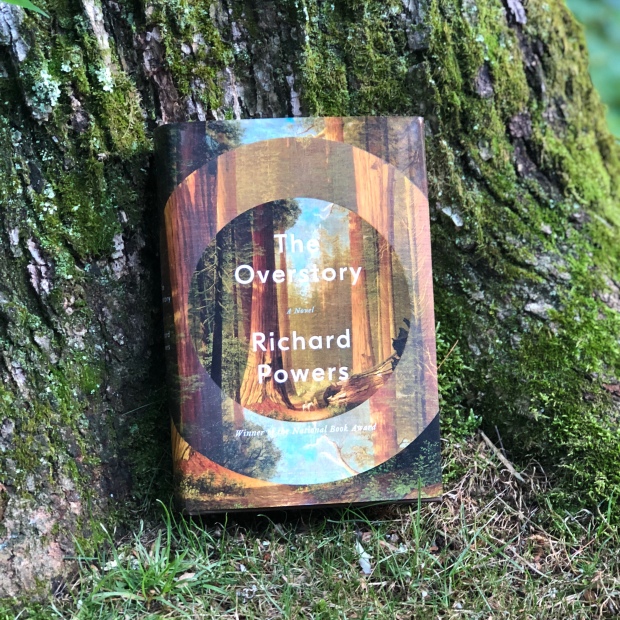 Next up for our Shadow Panel is The Overstory by American novelist Richard Powers. Five of our panelists read this book. We’re off to a rough start with longest books this year. Will this book break the trend? Here are our reviews…

Synopsis (from Amazon): An Air Force loadmaster in the Vietnam War is shot out of the sky, then saved by falling into a banyan. An artist inherits a hundred years of photographic portraits, all of the same doomed American chestnut. A hard-partying undergraduate in the late 1980s electrocutes herself, dies, and is sent back into life by creatures of air and light. A hearing- and speech-impaired scientist discovers that trees are communicating with one another. These four, and five other strangers―each summoned in different ways by trees―are brought together in a last and violent stand to save the continent’s few remaining acres of virgin forest.

Richard Powers delivers a sweeping, impassioned novel of activism and resistance that is also a stunning evocation of―and paean to―the natural world. From the roots to the crown and back to the seeds, The Overstory unfolds in concentric rings of interlocking fables that range from antebellum New York to the late twentieth-century Timber Wars of the Pacific Northwest and beyond, exploring the essential conflict on this planet: the one taking place between humans and nonhumans. There is a world alongside ours―vast, slow, interconnected, resourceful, magnificently inventive, and almost invisible to us. This is the story of a handful of people who learn how to see that world and who are drawn up into its unfolding catastrophe.

Jen’s Review: I was captivated by this book. I found the writing to be beautiful, the narrative structure clever, and the plot interesting. Overstory is an activist’s novel about trees, their importance, and how we treat them. What was fascinating to me is the way Powers infused this message into all aspects of the novel. The trees are characters, they are at the center of the book’s message, and they guide the narrative structure. The book is dived into 4 sections, each titled with a different part of a tree: Roots, Trunk, Crown, and Seeds. Each of these four sections is quite different in style and each style matches the subheading.

The book’s complexity is such that it’s impossible to outline it all in this mini review. You can read my full review (with quotes) on Goodreads. Overall, I thought this was a fantastic book with some flaws. Some sections felt bogged down with too much extraneous detail and those sections dragged for me. However, the good outweighed the flaws. It was unlike any other book I’ve read in the sense that it was a politically driven call to action within a fiction novel where both the messaging and story-telling elements were effective.  I happen to live in very wooded area and reading this book gave me the urge to go stand in the middle of the woods and observe all the trees.

Nicole’s Review: This book in two words?  Read. It.

Though I’ve only read 1/3 of the books nominated (so far), I really want this book to win.  It’s imperfect but deserving.   The first 30% of this 500 pager is meeting all the characters and learning their backstories (overstories?)  That is something which ordinarily would have driven me mad, but I was never bored.  Eager to get a move on, yes?  Also, enthralled.

This was an ambitious novel – I don’t know how Powers kept everything straight.  There was a lot and I mean a lot, to keep track of.  Sometimes a bit too much.  There was one character branch 😉 which could have been absent from the story and nothing would have been amiss – though even that I sort of “get” … Blighted human, still useful?

I really could go on and on about this book.  So many areas to discuss, and cleverness to explore through the eyes of other readers.   This book took root in my mind and I will never forget what I learned from it.  Trees, man … they are fascinating and important.  I dreamed of my avocado trees last night.

Andrew’s Review: After reading the first section of “The Overstory”, I was ready for it to be one of the best books I’d ever read. It was hitting all the marks I usually look for: beautiful, yet concise writing; characters I can really sink my teeth into; enough mystery to keep me reading; and most importantly, prodding me to think about the world a little differently. Unfortunately, once the main story takes off, the book seriously bogged down. It’s still a book I would heartily recommend, but it’s not a great novel in my humble opinion.

The conceit of this book is that it’s designed like a tree. The first section, “Roots,” introduces us to all the main characters in novel, concise, and delicious ways. I finished this excited for what lay ahead. The “Trunk” section, which makes up the vast majority of the book, was where things got a little tired for me. The writing became florid, the story less interesting, and I did find it strange that 6 of the characters came together, but 3 of the others remained outliers to the main story. In fact, me least favorite subplots were the Neelay and Richard/Dorothy storylines. Those could have been pruned (pun FULLY intended). The final two sections also seemed slightly overwritten and could have been cut down but wrap up the story in a satisfactory way.

Ultimately, this is an enjoyable read, with an important message – humans are destroying the Earth. As an environmental educator, that’s completely in my wheelhouse, but if you’re not into that stuff (p.s. – you should be… it’s true) this book will probably seem very preachy. I can attest that it has been meticulously researched as all the natural history information is accurate (and astonishing). If it had only been 150 pages shorter, it might have been perfect.

Book Worm’s Review: I agree with Jen and Nicole that is a beautifully written book with an important message about how we as humans treat the planet. I also agree that it is unique, that the narrative structure is interesting, and that the characters are fully developed.  On paper I should love this book but personally I found it dragged. I can’t believe it was only 500 pages long. I was reading on the Kindle and was expecting when I checked the page count to see something approaching the 800 mark it felt so long.

I can’t pinpoint what exactly made it drag for me or why I felt it was a chore to pick it up rather than a pleasure as there is nothing I would mark it down on except my personal enjoyment.

From a philosophical point of view should a book about the wonder of trees and how vital they are to the planet actually be printed on paper? This thought kept bugging me even though I was reading on the Kindle.

Lisa’s Review: Over story begins with a series of what are essentially short stories – the backstories – or roots of the people whose lives intertwine in various ways throughout the book. Each short story could stand on its own, a perfect tree in and of itself.

However, probably the biggest impact of this book was that it made me look at the trees in my backyard in a different way. Some of the memorable characters in the book are trees, including a giant in the pacific northwest in which two people live for over a year, and a chestnut in the Midwest planted by an immigrant. I ended up caring about the trees as much as the people – and that is not a bad outcome.

We want to hear from you. Have you read the book? What did you think? Does it deserve to make the shortlist? Why or why not?