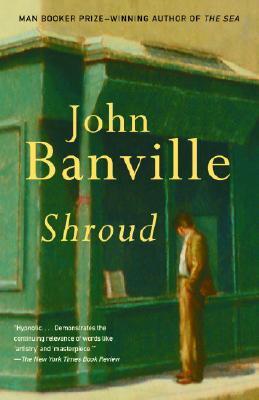 Synopsis (from Amazon): One part Nietzsche, one part Humbert Humbert, and a soupcon of Milton’s Lucifer, Axel Vander, the dizzyingly unreliable narrator of John Banville’s masterful new novel, is very old, recently widowed, and the bearer of a fearsome reputation as a literary dandy and bully. A product of the Old World, he is also an escapee from its conflagrations, with the wounds to prove it. And everything about him is a lie.

Now those lies have been unraveled by a mysterious young woman whom Vander calls “Miss Nemesis.” They are to meet in Turin, a city best known for its enigmatic shroud. Is her purpose to destroy Vander or to save him—or simply to show him what lies beneath the shroud in which he has wrapped his life? A splendidly moving exploration of identity, duplicity, and desire, Shroud is Banville’s most rapturous performance to date.

Book Worm’s Review
Rating: ★★★★
Shroud is a story of unreliable narrators and hidden pasts. Axel Vander having survived the Nazis has made a life for himself as a famous author living in American.  Yet Axel is not who he claims to be, and one day the letter he has been half expecting his whole life arrives. The letter is from a young woman, Cass Cleave who (in true horror movie style) claims to know what he did…

Cass uses her knowledge of his past to summon Axel to Turin, a town where he has several old colleagues who have tried, and failed, for years to get him to visit.

From the start we know that Axel is a grumpy old man with a history of being violent and aggressive and of course we know he has a secret, a secret someone else now knows. When we meet Cass, all we know is that she is young and Irish, that her father is a failed actor, and that her childhood has not been happy. As the narrative progresses, we learn that Cass is suffering from a mental disorder where she confuses reality and fantasy. The narrative switches between the two main characters. As a general rule, the Vander sections are first person and the Cass sections third person — a style I think works as it shows the unreliability of both.

I actually found myself quite enjoying the story even though many things are never spelled out clearly — something I normally find frustrating. As for the ending I found it to be touching in a strange way but entirely inevitable.

Jen’s Review:
Rating: ★★★
I loved and enjoyed Banville’s The Sea, but I can’t say I particularly enjoyed reading Shroud. Shroud is the story of Axel Vander, an unlikeable man with many secrets. When Vander receives a letter from a young woman claiming that she knows his secrets, Vander travels to Turin to meet this woman. Over the course of their interactions, Vander starts to reveal his true identify, one that had been shrouded under many layers of lies. The narration alternates between Vander and Cass Cleave’s perspectives. Cleave is a young woman plagued by mental illness.

As per typical Banville, the writing is wonderful. I just found the whole plot gloomy, dark, and disturbing. As a result I had a hard time feeling engaged despite the clever premise and exploration of interesting themes. I don’t typically shy away from dark reads and I frequently enjoy them. I think the combination of what I felt to be a slow pace and oppressive sense of gloom coloring everything made it a less enjoyable read for me. As a psychologist, I can be particularly critical of the way in which mental illness is portrayed and as a result, there were some elements in this book that I did not like.

In an interview for the Paris Review, Banville discussed his book saying that he would like to be remembered for Shroud. I think his statement perfectly captures my own experience of the book. I appreciated the craftsmanship and intelligence but struggled with the tone, and I hated the ending. Banville described Shroud in the following way:

It’s a dark, hard, cruel book. It’s the novel in which I got closest to doing what I aimed to do at the start of writing it. Everybody hated Shroud—even, I think, the people who admired it. It was favorably reviewed, but it was not and is not a book a reader could readily love. Shroud is my monstrous child whom I cherish but who horrifies others. The odd thing is that, for all its harshness, it’s a love story of sorts. I never thought I’d write a love story—what an idea! In my romance an old man and a young woman, both damaged, meet and develop a strange, violent, destructive rapport. And what is love if not strange, violent, and destructive? In love the loved one is the gilded mirror in which the lover admires himself. In the early stages there is tenderness and gaiety and fun, but these rapidly fade and we go into possession mode, trying to grasp the mirror and frequently smashing it.

You can read the whole article from the Paris Review here: John, Banville, The Art of Fiction. I do think it’s a book that is worth a read (despite my 3-star rating). Many will really appreciate the book.

Want to try it for yourself? Find it here: Shroud