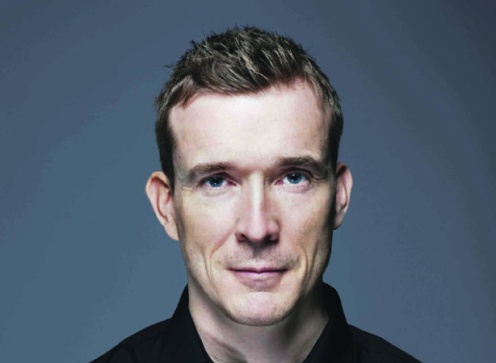 David Mitchell is a British author who was listed as one of the most influential people in world by Time Magazine in 2007. He was born in 1969 in Southport in Merseyside, England, and was raised in a middle-class family. He has a master’s degree in comparative literature. In his 20’s he fell in love with a Japanese woman and moved to Hiroshima where he lived for many years teaching English to technical students. He currently lives in Ireland with his wife and two children. Mitchell has talked openly about his son’s autism, and he and his wife, Keiko Yoshida, recently translated into English a memoir about autism titled, The Reason I Jump: The Inner Voice of a Thirteen-Year-Old Boy with Autism

. To hear him talk about this book on The Daily Show, click here.
Mitchell’s first novel Ghostwritten was published in 1999 to great literary claim. He was awarded the John Llewellyn Rhys Prize for the best work of literature written by an author under the age of 35. His next two books (Number9Dream & Cloud Atlas) were both shortlisted for the Man Booker Prize.

His novels have spanned the globe and ranged in historical setting. His books often are a blend of historical, contemporary, and science fiction. His writing has been compared to Dostoyevsky, Murakami, Pynchon, Chandler, Ursula K. LeGuin, DeLillo and Joyce — reflecting the breadth of his creativity and the multi-faceted nature of his books. His works have been translated into at least 19 languages and his readers are commonly referred to as “Mitchell Geeks” for their loyalty and fanaticism. But, who can blame them? Not only is Mitchell a wonderful author but he also has the reputation for being modest, really nice and down to earth.

Bibliography (click on the titles to take you to Amazon for a description of the books):

The Thousand Autumns of Jacob de Zoet: A Novel

The Bone Clocks: A Novel

For more information about David Mitchell’s books and biography, check out his website: http://www.davidmitchellbooks.com

💜 (congrats on finding this. It probably comes as no surprise to those of you who follow us regularly).

Jen’s Thoughts: I’ll leave it to Book Worm to provide rankings for her favorite of Mitchell’s books since I’ve only read Cloud Atlas (although I’m currently reading The Thousand Autumns of Jacob Zoet and have the Bone Clocks sitting on my end table). I will say that Cloud Atlas is one of my all-time favorite books. I have over 500 books on my Shelfari/Good reads shelves and of those, I’ve only awarded 9 books with a “favorite” rating. Cloud Atlas was everything I love in my favorite books: great writing, a compelling storyline that keeps you engaged, an unpredictable plot and a completely unique reading experience. So why haven’t I read more of Mitchell’s work? Sometimes, when I find a book I love, I am hesitant to read others by that author for fear of disappointment. And, I loved Cloud Atlas so much that I couldn’t bear to be disappointed.

Jen’s Update  (posted 11/17/2015): I have now read three more of his books including: The Thousand Autumns of Jacob de Zoet (3 stars); The Bone Clocks (4 stars); and Slade House (3.5 stars). Cloud Atlas is still my favorite but I did really enjoy Bone Clocks too.

Book Work Thoughts: Jen you really need to get to work on his back list. You will love his other books! I have read four of his books and now I just want to read them all. In a recent interview, David Mitchell said all his books can be viewed as chapters in a giant book with characters reappearing. Jen, as you have Jacob de Zoet and Bone Clocks, you will be ideally placed to see the character Marius in both. Luisa Rey from Cloud Atlas has also appeared in other works. I now want to read everything, and then reread them again to spot the characters who have crossed over. I mean come on, who doesn’t want to do that now that they know?

He has also said that he counts Haruki Murakami as one of the writers who has influenced him. And, we all know Murakami is another of my favorite authors. So it’s a win-win all round.

So onto my rankings;

Each narrative ends mid-story on a cliff hanger, but then it is cross-referenced in the subsequent stories so we know the final outcome for the character, albeit often in a cryptic way. When we reach the furthest point forward in time we then descend again through all the previous narratives tying up all the loose ends until we end with the initial narrative. The stories are all intriguing in their own rights but the crossovers make the story telling exceptional.

I loved the cyclical nature of the book.  We move through the stories to situations increasingly more removed (and presumably more advanced) from our current life on earth. Then the final narrative, one which is at the furthest from our present day time, echoes beginnings of human civilizations and it appears life has come full circle. In fact, one of the narrators comments on this by saying that in 10 years he will be doing the same thing again.

The book also contains my favorite quote: “A half read book is a half-finished love affair”

Number9Dream
5 stars
This is the story of 20 year-old Eiji Miyake and his journey from a rural village in Japan to the sprawling metropolis of Tokyo in search of his unknown father. Eiji has scant clues about his father — he knows only that he is a rich womanizer, and that he is protected by a female lawyer, the formidable Ms Kato.

When we first meet Eiji, he has just arrived in Tokyo and is planning how to get his father’s details from Ms Kato. From this point on, dreams and reality blur seemlessly and seemingly random occurrences eventually come together.

This book reminded me of Haruki Murakami’s stories and the passing allusion to The Wind Up Bird Chronicle made me smile.

I loved many things about this book from the romantic angle, to the discovery of what makes a family, to the weird dream sequences. However, I think it requires more than one reading: once to enjoy the sheer escapism of the novel and a second reading to connect the clues and coincidences you missed first time.

Now I will leave you with my favourite quote;

“What is born must one day die. So says the contract of life, yes? I am here to tell you, however, that in rare instances this iron clause may be… rewritten.”

The Bone Clocks is essentially the incredible life story of Holly Sykes. The story starts in 1984, when she is a rebellious teenager and goes all the way through to the 2040’s when she is a responsible grandmother. In between these periods of time, Holly must learn to cope with an ever changing world. The event with the most long-lasting repercussions is the disappearance of her younger brother Jacko. Along the way, Holly has many strange experiences and meets various strange people — all of whom appeared to be tied to her past, present, and future.

In typical David Mitchell style, this is a complex narrative with hints placed at various points throughout the story that do not become clear until the end. Then you have that moment of going, “ahhh I get why that happened like that now.”

I would love to say more about this but I am worried about spoilers so all I will say is read the book!!

Having previously read Cloud Atlas, I was really hoping to enjoy this story. Sadly it just didn’t inspire me the way Cloud Atlas did. I found the first 100 pages a real struggle, the story did pick up and became more interesting after that, but by the end of the novel I just felt flat. Perhaps there are subtle things in this that I missed but, for me, not a lot a happened.

The novel is divided into three sections: The first part details how and why Jacob has come to Dejima, a dutch trading station island just off shore of Nagasaki. He has come to route out corruption within the Dutch East India Company, a job that instantly makes him many enemies among the men with whom he works. Jacob is an honest man and a Christian, a religion outlawed in Japan. So he is forced to keep his faith hidden while following his conscience.

Despite being promised to Anna at home in the Nederlands, Jacob is drawn to the scar-faced midwife Orito.Part 2 deals with Orito’s story and how she ends up at the mysterious Mount Shiranui shrine. It describes the lengths to which she goes to fit into her new life.

Part 3 deals with an English captain, Penhaligon, who plans to establish a British trade post at Dejima.The narrative then skips several years and we see the outcomes for the main characters.

This is as much as I think I can say as I will otherwise be giving things away. I will say I liked the use of interpreters and the lack of common words between the Dutch and Japanese.

I enjoyed the descriptions of family, love and honor, and how much must be sacrificed. I also really enjoyed the game Go and it’s links to the overall story line of the book. I suspect that I may have missed subtle hints and details related to this game and its importance in the story line. I think this is a book that could do with being reread, but life is just too short.

Wow, that was a harsh review from me. Now that I have new insider information about the characters, I have decided life is not too short and I really need to read this again! Maybe I just wasn’t in the right frame of mind when I read it. I will have to see if Jen’s reading reflects mine or not, as we are so similar in tastes.

Anyway I have now decided David Mitchell can do no wrong and I will be making my way through all his books will any of you be joining me?

Which Mitchell books have you read? What are your thoughts about his books? Do you have a favorite? A least favorite?