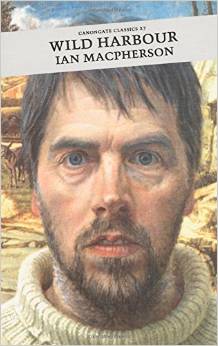 When news of war comes to Scotland, Terry and Hugh, a married couple, decide to abandon their home and society in order to avoid the war and its consequences. They set up camp in a cave in an isolated area around Loch Ericht in the highlands of Scotland. Wild Harbour has the feel of a post-apocalyptic novel (isolation, struggle to survive, and conflict with other men who are struggling to survive off limited resources). It is a survival story that explores the bonds of human relationships. Set in the 1940s, but published in 1936 before World War II (thus, MacPherson predicts the war), it is told as a series of journal entries written by the husband, Hugh.

I love books that provide rich detail about nature, wilderness, and man’s struggle in the wild. These kinds of books always make me think about how well I’d fare if I had to try and survive in the wilderness. Chances are, I’d probably perish within the first week. I can barely put together a piece of furniture with an instruction manual let alone build a chimney, make oil out of animal fat, cut squares of peat, skin animals, salt meat, etc.

MacPherson perfectly captures the loneliness and beauty of this isolated spot. I looked up the area and the pictures (see below) I found were a perfect match for the mental pictures the author had created for me. The book is filled with rich descriptions of the landscape and weather, and their impact on the human psyche.

I really liked the way that that the author captured the range of emotional experiences that a couple would likely experience in such a scenario. The contrast between Terry and Hugh’s reaction to things was interesting and I liked how this contrast played an important role at the end of the book. Macpherson also explores how the environment tests a couple’s relationship in a believable way.

As I mentioned earlier, the book was told through a series of journal entries. I didn’t find the journal entry style believable. I liked the idea of the journal, but the entries did not read like journal entries. Instead they seemed like ordinary narrative.  For example, most people don’t put entire word-for-word transcripts of long conversations in their journal entries. I found that to be a flaw in the format although I still enjoyed the writing.

Overall, I enjoyed the book. The tension and action built very quickly at the end Although the story had a slow start, the action the tension and action built up quickly in the last 25% of the book. The writing was strong and the characters were well-developed. I recommend this book for people who like rich descriptions of nature and books that focus on human survival in harsh conditions.

Warning: The book comes with an introduction written by John Burns that has major spoilers. I really hate when publishers do this. Why put major spoilers in a preface so people see it before starting the novel? So, avoid reading the introduction before you’ve read the book.