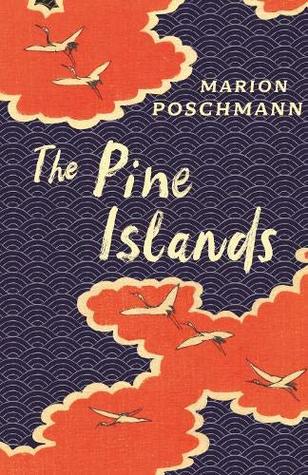 Number 11 – read and reviewed by panelists Book Worm and Tracy…

Synopsis from Goodreads: When Gilbert Silvester, a journeyman lecturer on beard fashions in film, awakes one day from a dream that his wife has cheated on him, he flees – immediately, irrationally, inexplicably – for Japan.

In Tokyo he discovers the travel writings of the great Japanese poet Basho. Suddenly, from Gilbert’s directionless crisis there emerges a purpose: a pilgrimage in the footsteps of the poet to see the moon rise over the pine islands of Matsushima.

Falling into step with another pilgrim – a young Japanese student called Yosa, clutching a copy of The Complete Manual of Suicide – Gilbert travels with Yosa across Basho’s disappearing Japan, one in search of his perfect ending and the other the new beginning that will give his life meaning.

The Pine Islands is a serene, playful, profoundly moving story of the transformations we seek and the ones we find along the way.

Tracy’s Thoughts: Gilbert wakes up from a dream that his wife is cheating, absolutely believes it, and leaves his (not really) cheating wife on a trip from Germany to Japan.

Then, in Japan, he stops a young man, Yosa Tamagotchi, from jumping in front of a train, adopts him as a guide to take him to the Pine Islands, and proceeds to defer the suicide- a good deed! However, he also proceeds to tell this young Japanese man how Japanese culture works. Because he’s been in the country for the first time for a day or two now.

I struggled with this one. I felt that Gilbert was a pompous, self-involved jerk, but his character was clear cut. Yosa’s character wasn’t- he was treated like the toy he shares his last name with. The writing style was a bit off-putting, but I can’t pinpoint exactly why. There was no real plot- normally travel leads to self discovery for the main character somehow, but I need to look harder for the epiphany. It wasn’t horrible, but I’m probably not going to remember this one in a few weeks.

Book Worm’s Thoughts: I enjoyed this quirky little book about a man who puts excessive faith in his dreams and allows them to dictate how he behaves in real life.

I agree with Tracy that Gilbert is a pompous know it all but for me he is redeeming himself as he travels across Japan. When the novel starts he is completely convinced that his actions are right however the longer he is away from his wife the more he seems to mellow in his belief that he has been wronged. The letters he writes to her become friendlier and seem to be heading towards him apologising fully and reconciling.

I found the idea of a suicide location guide fascinating and I enjoyed the descriptions of these places and why Yosa might be tempted to choose them for suicide, it was also interesting to see the arguments Gilbert uses against Yosa choosing the location for his death.

The study of beards and their relationship to different cultures and religion was a fun addition to the story and I found myself nodding along in agreement at several of the points Gilbert makes regarding this.

The descriptions of the Japanese flora and fauna as well as the cultural references made this a great little read for me.