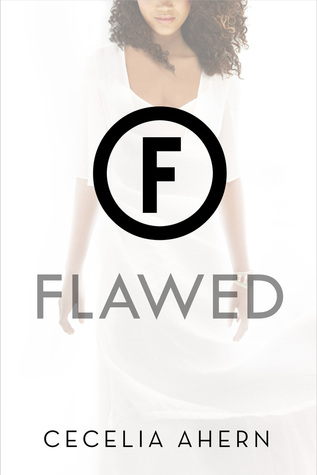 This ARC was provided by Harper Collins UK (via NetGalley) in exchange for an honest review.

Synopsis from Goodreads: Celestine North lives a perfect life. She’s a model daughter and sister, she’s well-liked by her classmates and teachers, and she’s dating the impossibly charming Art Crevan.

In her breathtaking young adult debut, bestselling author Cecelia Ahern depicts a society where perfection is paramount and flaws lead to punishment. And where one young woman decides to take a stand that could cost her everything.

Book Worm’s Thoughts: I really enjoyed this story. I found myself totally invested in Celestine and how she dealt with what  happened to her. Ahearn has done a great job of world building. The story is set in an alternate future, after the banks crashed, and it is similar enough to society today, with the exception of the Flawed, that it rings eerily true. Given the right set of circumstances, I could visualize this new society occurring.

The characters face tough moral decisions. Should they do the compassionate thing in-spite of the threat they could be found Flawed or should they do what the rest of society does and turn a blind eye? I enjoyed the political undertones and how the book captures the way events are spun by the media and those in charge. I also enjoyed the allusion to recent events in England where things are not black and white such as assisted dying and the Ashya King case where those in charge appear to be out of step with those they govern.

Unfortunately, there is a “love triangle.” This seems to be a staple of YA fiction and it’s a trope that I would be quite happy to see dropped. Seriously a single heroine or hero would be cool. The biggest problem is that I have to wait until next year to find out what happens.

Reading this book so soon after we published our post questioning why so many adults (myself included) love young adult fiction, made me contemplate some of the Slate article’s claims against YA. The author of said article made several generalizations about YA. I briefly consider some of those claims and my reaction to them based on my experience reading Flawed.

So who would like this book? Fans of dystopian fiction will love this new world and it goes without saying that if you are a YA fan you should pick this one up.

Want to try it for yourself? You can find a copy here: Flawed