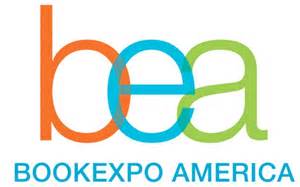 Many of you know that I’m away at BEA this week. This year the expo is in Chicago so I flew out here on tuesday and since I’m too tired to socialize tonight (gathering books is surprisingly exhausting), I thought I’d write an update.

Wednesday I spent the majority of the day at the bloggers conference but I did sneak out for a few hours to collect galleys and to snag a signed copy of Mo Willem’s Elephant and Piggy Thank you Book for my daughter who is obsessed with pretty much everything Mo Willems writes. I won’t bore you with too many details about the bloggers conference other than to say it was interesting and nice to meet a few people whose blogs I have read.

Today, I spent all day on the exhibit floor, grabbing galleys, visiting booths, and attending a few author signings. I’ve collected about 60 books so far. Overall, I have found the expo to be very YA heavy and I’ve had to dig around to find the relatively few literary fiction folks. I don’t hate YA, it’s just something I that I don’t usually read, so I was a little disappointed to see so much of it all around me. On the plus side, while lots of people were pushing and shoving in line to get to see the YA authors, I was having a more leisurely time lining up for my preferred authors. Here are a few of my favorite finds (even includes one YA):

Highlights: Nathan Hill and Mo Willems signings. Nathan Hill was one of the featured BEA buzz authors and I heard him speak about his book before the signing. His book, Nix, sounds incredibly interesting, Nathan was eloquent and highly intelligent and he was the one of nicest authors I met during the expo. His book signing line moved at a snail’s pace but that was because he chatted with everyone in line. His book wasn’t really on my radar until the talk and after meeting him, it has moved up on my TBR.

Mo Willems is awesome and even though I was really trying to snag a book for my daughter, I love his books and I couldn’t help but love him. I got some awful pictures (of myself) with him because he kept cracking jokes and I kept busting out laughing (as did the person taking the photo).

Lowlights: Jonathan Safran Foer signing. This was all my own fault. Jonathan was extremely nice and took the time to chat with people in line rather than just sign his books. The problem was that I simply just froze. It was my first signing of BEA and I don’t know what happened to me because when he asked me if I had any questions, I just stood there staring at him like an idiot. Not my finest moment. I used to work in TV and I’ve met countless celebrities without being in the least bit fazed, but authors often leave me starstruck. I almost had a similar moment with Colson Whitehead but I pulled myself together in time. I guess I should be grateful it wasn’t David Mitchell or I might have keeled over and then been mortified.

Plans for tomorrow: I’m looking forward to getting an autographed copy of Justin Cronin’s City of Mirrors. The book comes out in a few weeks and I’ve already read a galley (review to come shortly). Not my typical fare, but even I like a good apocalyptic novel and Cronin can write like no one’s business. I’m also hoping get to Richard Russo’s book signing.

We want to hear from you! Have you been to a BEA before? Are you attending this year? What were some of your highlight and lowlights?