Who Fears Death by Nnedi Okorafor 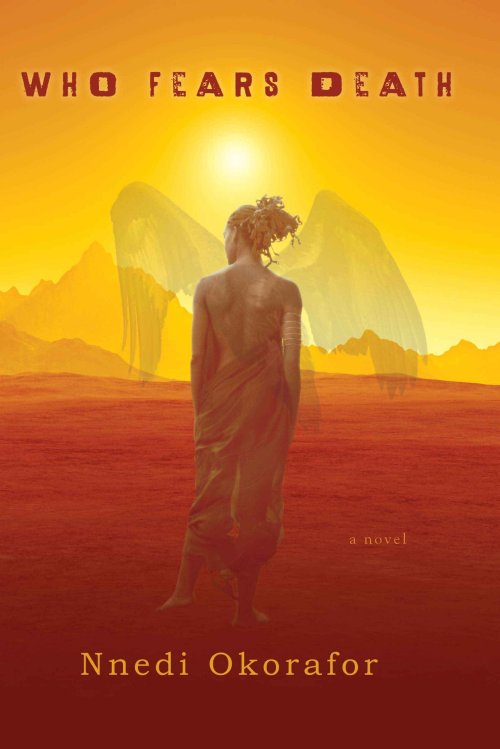 Last November I attended the Book Riot Live convention (read my review here) and while I was there I signed up for the book match by Brooklyn library librarians. I listed my favorite authors as David Mitchell, Haruki Murakami, Chimamanda Adichie, and Margaret Atwood. and I listed my favorite genres: literary fiction, fantasy, magical realism, and international literature. Finally I mentioned that I particularly like books that focus on cultures and traditions that are different from my own. One of books they recommended was Akata Witch

by Nnedi Okorafor. I don’t typically go for children’s books so when I was looking for a book published in 2010 (for a reading group I belong to called Play book tag) and I came across this one by the same author, I thought I would give it a shot.

Who Fears Death is a speculative fiction novel with fantasy elements that deals with issues of race, ethnicity, and gender. It is set in a fictionalized version of a post-apocalyptic Sudan and centers around a young woman, Onyesonwu (Ibgo for “who fears death).

Onyesonwu is referred to as an Ewu due to her mixed blood. She is was a child conceived from a brutal rape. Her mother is a member of the dark-skinned Okeke tribe who is raped by a man from the light-skinned Nuru tribe. The Nuru and Okeke people have a long, violent, and complicated history. As Onyesonwu matures, she discovers her history and she learns that she has magical powers. Along with a group of friends, she embarks on a a quest to find and defeat her father who is responsible for inciting genocide against her mother’s people.

I had only heard of the author from her young adult work. This certainly wasn’t geared toward young adults with respect to it’s content (e.g., rape, genocide, graphic descriptions of female circumcision) but the style of writing seemed very much to fall in YA genre. The novel tackles gender and racial stereotypes  through use of a very strong, complex, and mixed race female protagonist but at times I found it a little obvious with the character explicitly stating about how women can be heroes too. I don’t think this was necessary because her actions were enough to show her strength as a woman without needing to sprinkle in statements explicitly describing her strength. I think this was why I felt like it had a YA feel to me. However, I did think it was a very engaging read that tackled a number of complex issues.

The prose is wonderful. Okorafor’s style combines elements of African folklore with modern ones, creating a story that is strongly rooted in tradition while at the same time forward-thinking in a way that is reminiscent of science fiction writing.

The novel is very close to fantasy genre. There’s magic and sorcery but from a cultural perspective that is different from what we normally see in fantasy.

How many epic fantasy novels can you think of that feature a woman of color as the hero? I’m glad that I decided to try it out and I think I’ll have to check out Akata Witch. Thanks to the Brooklyn Library librarians for turning me onto this author. I highly recommend this book to readers who enjoy fantasy with interesting cultural and gender elements.

Want to try it for yourself? You can purchase your copy here: Who Fears Death