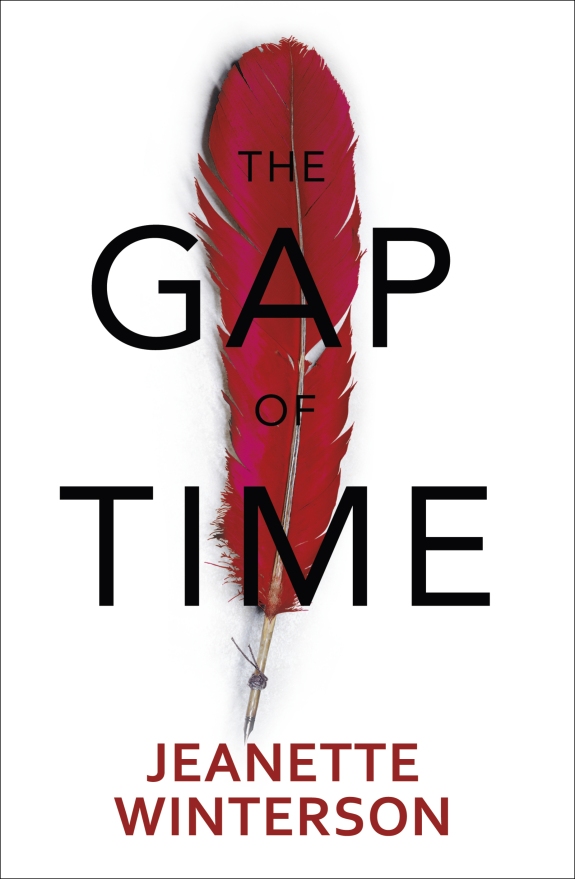 Amazon synopsis: The Winter’s Tale is one of Shakespeare’s “late plays.” It tells the story of a king whose jealousy results in the banishment of his baby daughter and the death of his beautiful wife. His daughter is found and brought up by a shepherd on the Bohemian coast, but through a series of extraordinary events, father and daughter, and eventually mother too, are reunited.

In The Gap of Time, Jeanette Winterson’s cover version of The Winter’s Tale, we move from London, a city reeling after the 2008 financial crisis, to a storm-ravaged American city called New Bohemia. Her story is one of childhood friendship, money, status, technology and the elliptical nature of time. Written with energy and wit, this is a story of the consuming power of jealousy on the one hand, and redemption and the enduring love of a lost child on the other.

As you can see from the synopsis above, The Gap of Time is Jeanette Winterson’s retelling of the Shakespeare play The Winter’s Tale. If you have read or seen the play then you know what will happen to the characters. If you haven’t read it, the play is recapped at the start of the novel in a couple of paragraphs so you have the basic lay out. How you get to the ending is what matters.

Winterson has updated the action to a date in the future, but not that far in the future as modern events are still referenced by the characters. The character names have been modernized but still retain their roots for example Leontes becomes Leo, a highly successful business man with the money to make people do whatever he wants, including spying on his wife and taking a new born baby away from her mother.

What I loved about this book was the way Winterson convinces you that all the events could really have happened. I also loved how she gets around modern day inventions like the DNA to prove paternity. The characters all felt real and I really loved the book-based computer game, Fallen Angels, that Xeno was developing. This added another level to reflect the events of the real world.

As usual with Winterson the writing was beautiful and poetic, here are a few of my favourite quotes;

“I don’t know where God is but I reckon God knows where I am. He got the world’s first global app”

“‘But what do you do’ said MiMi, ‘if to be free you demolish everything around you?'”

“The church had a clock tower. On the top of the tower, one at each compass point, were four stone angels. ‘You see?’ said the nurse. ‘How they see it all? The cars going by, the men and women on the streets. All the hope and the heartbreak. Yes, that is what they see. And though the earth is lost she will be found. Whatever is lost will be found”

“And then everything happened in slow motion and too fast”

“So many stories of lost and found. As though the whole of history is a vast lost-property department”

“Its not that time stops or that is hasn’t started. This is time. You are here. This caught moment opening into a lifetime”

There are so many great quotes I could go on for pages but I will leave it there.

The central themes of the novel are time, love, obsession, jealousy, vengeance and ultimately regret and forgiveness.

I am looking forward to the rest of the books in the series. Who would enjoy this book? Anyone who enjoys Shakespeare or who has an interest seeing his work get a modern twist as well as those who like a heartfelt and tragic romance.

Want to try it for yourself? You can find it here: The Gap of Time: A Novel (Hogarth Shakespeare)

We want to hear from you. Have you read this book? What did you think? Have you read others by Jeanette Winterson? Which are your favorites?

Like Loading...
Tags: books
From: 5 star reviews, BW's Reviews, Non-1001 Book Review
← Love it or Hate it? The Elegance of the Hedgehog by Muriel Barbery
Read Around the World: Wales →
7 Comments Post a comment