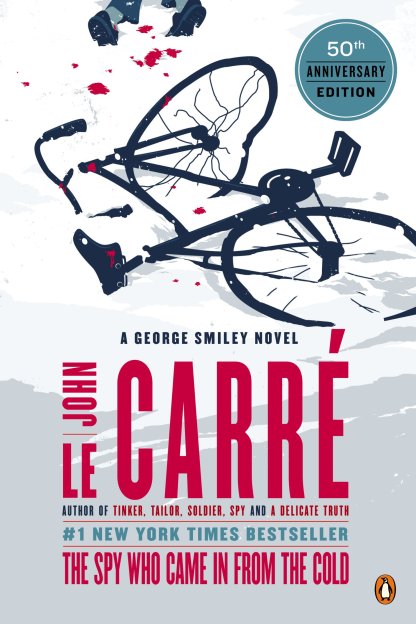 I don’t typically go in for spy novels because I usually find them overly dramatic with unbelievable plot lines and extensive use of deus ex machinas (one of my literary pet peeves). However, I’ve been wanting to read a book by John Le Carré for a long time, despite the fact that I fell asleep several times while trying to watch Tinker Tailor Soldier Spy (I won’t judge the book by the movie). He has three books on the 1001 Books to Read Before you Die list and The Spy Who Came in from the Cold is one of them.

I was pleasantly surprised by how much I liked The Spy Who Came in from the Cold. It was the opposite of all the stereotypes I have about spy novels. Grahame Greene referred to the novel as the “best spy novel I have ever read” and that is definitely true for me (although as I previously admitted, I don’t read many of them).

Alec Leamas who has been stationed in West Germany, is called back to London after the last agent under his command is killed. Leamas returns to England thinking that he will finally be able to “come in from the cold” but when he returns he learns that “control” has other plans for him. Leamas is asked to go on one last mission to help bring down the head of East German Intelligence – the man considered responsible for killing all of Leamas’s agents. What subsequently ensues is a plot filled with twists and turns, yet one entirely believable based on intellectual manipulation rather than action-driven stunt scenes.

Le Carré (born David John Moore Cornwell) was a member of the British Foreign Service from 1959-1964 and described himself as “a writer who, when I was very young, spent a few ineffectual but extremely formative years in British Intelligence.” His background explains why the novel felt so genuine and real — because he was immersed in that life. There are no heroes in this story –No 007 types who save the day attempting a million death defying feats without breaking a sweat with capturing the hearts of busty femme fatales. Leamas is a flawed man who is talented at what he does, but who is entirely human. The lines between good guys and bad guys is blurred if not non-existent. It’s an intelligent story that seems to capture how I imagine really espionage work would be when not scripted by Hollywood.

Want to try if for yourself? You can find it here: The Spy Who Came in from the Cold

We want to hear from you! Have you read this book? What did you think? Do you have any other recommendations for spy novels?