3 Books about Running for Marathon Monday

I’m not a runner and never have been. I don’t think I have the discipline and while I enjoy cycling, swimming, sports, dancing and many other athletic activities, running makes me feel like I’m dying. But, I LOVE marathon monday. We live in the Massachusetts and every year we head to the sidelines to cheer on the runners. It’s a wonderful and festive event with people from all over the country cheering on the best runners from all over the world.  This year we’ll be cheering on several friends as well as lots of strangers!

In honor of one of my favorite holidays, I’ve posted a list of 3 books (below) for the runner (or want to be runner).

1. What I talk about when I talk about Running by Haruki Murakmi.
Synopsis (from Amazon): An intimate look at writing, running, and the incredible way they intersect, from the incomparable, bestselling author Haruki Murakami.While simply training for New York City Marathon would be enough for most people, Haruki Murakami’s decided to write about it as well. The result is a beautiful memoir about his intertwined obsessions with running and writing, full of vivid memories and insights, including the eureka moment when he decided to become a writer. By turns funny and sobering, playful and philosophical, What I Talk About When I Talk About Running is rich and revelatory, both for fans of this masterful yet guardedly private writer and for the exploding population of athletes who find similar satisfaction in athletic pursuit.

Marathon Man: My 26.2 Mile Journey from Unknown Grad Student to the Top of the Running World by Bill Rogers

Synopsis (from Amazon):The legendary long-distance runner details his historic victory in the 1975 Boston Marathon that launched the modern running boom

Within a span of two hours and nine minutes, Bill Rodgers went from obscurity to legend, from Bill Rodgers to “Boston Billy.” In doing so, he instantly became the people’s champ and the poster boy for the soulful 1970s distance runner. Having won the Boston Marathon and New York Marathon four times each, he remains the only marathoner to have appeared on the cover of Sports Illustrated twice. Winning the Holy Grail of marathons in an unthinkable record time changed Bill’s life forever.

But his dramatic breakthrough in Boston also changed the lives of countless others, instilling in other American runners the belief that they could follow in his footsteps, and inspiring thousands of regular people to lace up their shoes and chase down their own dreams. In the year before Rodger’s victory at the 1975 Boston Marathon, 20,000 people had completed a marathon in the United States. By 2009, participants reached nearly half a million.

Thirty-seven years later Bill Rodgers still possesses the same warm, endearing, and whimsical spirit that turned him into one of America’s most beloved athletes. In Marathon Man he details for the first time this historic race and the events that led him there.

Find it here:Marathon Man: My 26.2-Mile Journey from Unknown Grad Student to the Top of the Running World 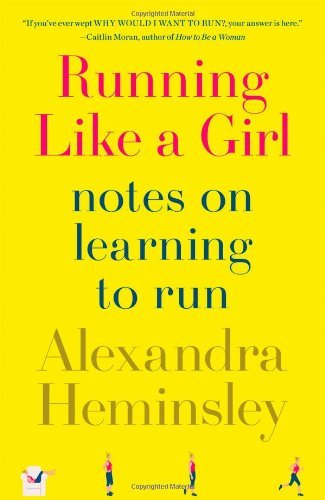 3. Running Like a Girl: Notes on Learning to Run by Alexandra Heminsley

Synopsis: In her twenties, Alexandra Heminsley spent more time at the bar than she did in pursuit of athletic excellence. When she decided to take up running in her thirties, she had grand hopes for a blissful runner’s high and immediate physical transformation. After eating three slices of toast with honey and spending ninety minutes on iTunes creating the perfect playlist, she hit the streets—and failed miserably. The stories of her first runs turn the common notion that we are all “born to run” on its head—and expose the truth about starting to run: it can be brutal.

Running Like a Girl tells the story of how Alexandra gets beyond the brutal part, makes running a part of her life, and reaps the rewards: not just the obvious things, like weight loss, health, and glowing skin, but self-confidence and immeasurable daily pleasure, along with a new closeness to her father—a marathon runner—and her brother, with whom she ultimately runs her first marathon.

But before that, she has to figure out the logistics of running: the intimidating questions from a young and arrogant sales assistant when she goes to buy her first running shoes, where to get decent bras for the larger bust, how not to freeze or get sunstroke, and what (and when) to eat before a run. She’s figured out what’s important (pockets) and what isn’t (appearance), and more.

For any woman who has ever run, wanted to run, tried to run, or failed to run (even if just around the block), Heminsley’s funny, warm, and motivational personal journey from nonathlete extraordinaire to someone who has completed five marathons is inspiring, entertaining, prac­tical, and fun.

Find it here:Running Like a Girl: Notes on Learning to Run

See photos for Boston Runners throughout history in this recent Time magazine article.

We want to hear from you! Are you a runner? Have you read any good books on running?