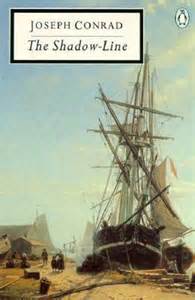 Synopsis from Amazon: Written in 1915, The Shadow-Line is based upon events and experiences from twenty-seven years earlier to which Conrad returned obsessively in his fiction. A young sea captain’s first command brings with it a succession of crises: his sea is becalmed, the crew laid low by fever, and his deranged first mate is convinced that the ship is haunted by the malignant spirit of a previous captain.

This is indeed a work full of ‘sudden passions’, in which Conrad is able to show how the full intensity of existence can be experienced by the man who, in the words of the older Captain Giles, is prepared to ‘stand up to his bad luck, to his mistakes, to his conscience’. A subtle and penetrating analysis of the nature of manhood, The Shadow-Line investigates varieties of masculinity and desire in a subtext that counterpoints the tale’s seemingly conventional surface.

This is a novella told from the point of view of an older man looking back at a pivotal moment in his left when he crossed the shadow line between youth and adulthood.

The day he decides to quit his position as a first mate on a ship in the Orient and to return to England, he learns he is considered to be the only man able to captain a ship whose Captain recently died. Unable to resist, the young man travels to join his new crew only to discover that things are not what they seem.

His first voyage is marred with set backs: the crew suffer from Malaria, there is no wind to travel, and his first mate appears to be under the delusion that the previous captain had tried to kill them all.

The novel was first published in 1915 as a serial in New York’s Metropolitan Magazine.

Having previously read Heart of Darkness I was expecting this to be a struggle to read. However, it was a solid straightforward narrative with light-hearted moments as well as tension. What really came across was how the unnamed narrator still felt guilty for events he had no control over.