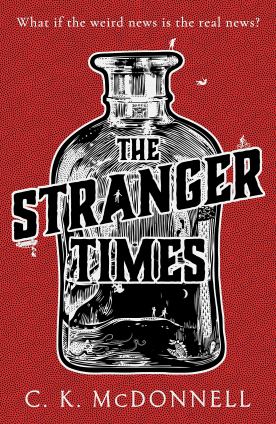 Synopsis from Goodreads: There are dark forces at work in our world (and in Manchester in particular), so thank God The Stranger Times is on hand to report them…

A weekly newspaper dedicated to the weird and the wonderful (but mostly the weird), it is the go-to publication for the unexplained and inexplicable. At least that’s their pitch. The reality is less auspicious. Their editor is a drunken, foul-tempered, and foul-mouthed husk of a man who thinks little of the publication he edits. His staff are a ragtag group of misfits. And as for the assistant editor… well, that job is a revolving door–and it has just revolved to reveal Hannah Willis, who’s got problems of her own.

When tragedy strikes in Hannah’s first week on the job, The Stranger Times is forced to do some serious investigating. What they discover leads to a shocking realisation: some of the stories they’d previously dismissed as nonsense are in fact terrifyingly real. Soon they come face-to-face with darker forces than they could ever have imagined.

My Thoughts: This was just the book I needed, it is hilarious (British humour), it is heart-warming, it has a diverse cast of characters you just can’t help but love and even better it is the first book in a series woo hoo.

This is the classic battle of good and evil with vampires, weres and the fay thrown in for good measure all played out against the back drop of a tacky conspiracy theory paper in Manchester if that doesn’t make you just want to eat this up I don’t know what is wrong with you.

From the very start I was pulled into this alternative England and almost from the very start the laughing began. As someone living in England I have experienced so many of the things in this book which is what makes the situations the characters find themselves in so funny.

Some of the lines that had me laughing:

“Once inside the pub, Hannah realized that beneath its gruff exterior, the Admiral’s Arms was even gruffer. It wasn’t a 1970s-themed pub; it was a pub that had been built in the 1970s and had remained exactly the same, only somehow it had grown worse” Hands up everyone who has been in this pub!

“That old crowd had too much class to practise honesty. If you wanted to hear what they really thought of you, you’d need to somehow be in the room you’d just walked out of.” Hands up who has worked/socialised with these people!

“His car’s engine was loud, but not souped-up, obnoxious type of loud that some individuals embrace in an effort to make up for a massive shortcoming in the personality stakes.”

“It had taught her two valuable lessons; one, you couldn’t trust people; and two, alcohol was only the answer if they question was ‘how can I make everything worse?”

Who would like this? I would recommend this to anyone who needs some pure unadulterated supernatural fun with the odd scare and a whole of heart thrown in.

This also has the best acknowledgements I have read in a long time. Go on treat yourself.

Like Loading...
From: Uncategorized
← BookWorm’s Top 22 Books of 2022
No One Saw it Coming by Susan Lewis →
No comments yet