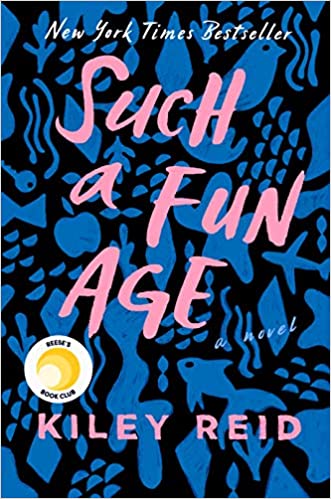 Book One – reviewed by panelists Nicole, Lisa and Susie rated by BookWorm and Tracy.

Kiley Reid was born in Los Angeles, CA and raised in Tuscon, AZ.

Synopsis from Booker Prize website:  What happens when you do the right thing for the wrong reason?

Alix Chamberlain is a woman who gets what she wants and has made a living showing other women how to do the same. So she is shocked when her babysitter, Emira Tucker, is confronted while watching the Chamberlains’ toddler one night. Seeing a young black woman out late with a white child, a security guard at their local high-end supermarket accuses Emira of kidnapping two-year old Briar. A small crowd gathers, a bystander films everything, and Emira is furious and humiliated. Alix resolves to make it right. Emira herself is aimless, broke and wary of Alix’s desire to help. At twenty-five, she has no idea what to do with her life. When the video of Emira unearths someone from Alix’s past, both women find themselves on a crash course that will upend all they think they know about themselves, and each other.

With empathy and piercing social commentary, Such A Fun Age explores the awkwardness of transactional relationships, what it means to make someone ‘family’, the complicated reality of being a grown-up and the consequences of doing the right thing for the wrong reason.

Might be a fun age, but not a fun book.

There is no denying that authors of color have been underrepresented in literary awards.  There was a lot of talk that The Vanishing Half was going to be nominated for the Booker this year, and I was against that.  It’s just not good enough.  And then I read this …

I’m not even sure how I gave this book 2 stars.  I don’t know who the judges are but I have to believe they really talked themselves (or were pressured) into this one.  To start, it’s not literary.  It’s perhaps a step above chick-lit.

I only understood one relationship in the book and that was the relationship between the main character (Emira) and the child she babysat (Briar).  Everybody else, I couldn’t see the attraction.  Maybe spoilers: Why was the mom (Alix) so hellbent on being besties with Emira? How did Emira and Kelley fall in love?  They had nothing in common, a couple odd dates, and then bam, in love.  And how on God’s green earth was Alix still so affected by Kelley after all those years?  If I saw someone who dusted me in high school, I’d barely acknowledge his existence, BECAUSE IT WAS FOREVER AGO.  Perhaps I’m implying that Alix was stable in some way.  She was not.  End sort of spoilers.

If not for Booker this is a book I would never have read.  It’s not my kind of thing, so it’s no surprise I didn’t like it.  But it was nominated for Booker, and has to be judged next to Apeirogon and they are light years apart on every level.  It wasn’t funny, there was nothing special about the writing, the “woke” white people were just annoying (and I say that being one myself, and probably annoying as well) and the characters (with the exception of Briar) were unlikable in every possible way.

There seem to be very mixed reviews of this book, with some readers loving it and other hating it. I listened to it, and I enjoyed it. Emira, the main character, was a young adult, out of college, trying to find her path, and not knowing what that is. This path – or looking for a path and having trouble finding it post-college – rings true. The episode at the beginning of the book – where Emira is questioned for being a Black woman with a white child in a grocery store late at night – unfortunately was also very realistic. It was reminiscent of Amy Cooper calling the police on Christian Cooper in Central Park. In contrast, Alix, the wealthy white mom in the story, was so over the top that I found it quite funny, at least until her behavior became increasingly destructive. Ultimately, I enjoyed the juxtaposition of these two women’s stories, and how the stories intersected. And, I thought that this book illuminated many ways in which attempts of white people to address racial issues and racism can go so very wrong.

This is a buzz book. Reese Witherspoon has plastered it all over the internet, making it an overnight success. The movie rights have been acquired. But it was meh. Don’t get me wrong, it was very readable, or in my case listenable, but I found that it relied a little too heavily on coincidence, was overwritten and cliche, and was overly descriptive. The audio was very well done which helped to propel the book along, To be honest, if I read it instead I think it would be two stars rather than three. The theme is an important one, but I would have liked to see it handled with more finesse. It’s going to fade quickly for me.

As an aside, the name Alix (pronounced Aleex) drove me to distraction!

BookWorm 4 stars from me

Have you read it?  Are you in the love it or hate it camp?

Like Loading...
From: Uncategorized
← Idle Hands by Cassondra Windwalker
Booker Longlist – Redhead by the Side of the Road – Anne Tyler →
No comments yet