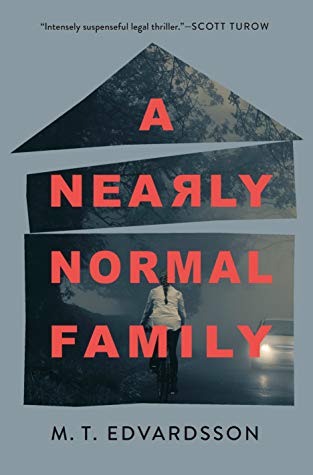 What really goes on behind closed doors…

This ARC was provided by Pan Macmillan (via NetGalley) in exchange for an honest review.

Synopsis from Goodreads: M.T. Edvardsson’s A Nearly Normal Family is a gripping legal thriller that forces the reader to consider: How far would you go to protect the ones you love? In this twisted narrative of love and murder, a horrific crime makes a seemingly normal family question everything they thought they knew about their life—and one another.

Eighteen-year-old Stella Sandell stands accused of the brutal murder of a man almost fifteen years her senior. She is an ordinary teenager from an upstanding local family. What reason could she have to know a shady businessman, let alone to kill him?

Stella’s father, a pastor, and mother, a criminal defense attorney, find their moral compasses tested as they defend their daughter, while struggling to understand why she is a suspect. Told in an unusual three-part structure, A Nearly Normal Family asks the questions: How well do you know your own children? How far would you go to protect them?

Book Worm’s Thoughts: This is a solid murder mystery. From the start we know a man has been murdered and that Stella has been arrested and charged with the crime, what we don’t know is if she is really guilty and what motivated the murder in the first place. We also learn just how far her parents are prepared to go to protect her.

We are told events from 3 points of view beginning with the father, followed by the daughter and finally the mother. Each narrative goes back in time and shows different sides to all 3 characters. While they initially appear to be the perfect family the historical narratives tell a different story as does the build up to the murder.

The book keeps the suspense building until the very last moment when the reader finally learns the truth. What we learn along the way is that no matter how well you think you know someone else you probably don’t know them as well as you think. We also learn that no matter what you believe personally most people will abandon any moral system to protect the ones they love.

Who would like this? Anyone who likes a good family morality story and enjoys murder mysteries that are not too gory. This is a book from a Swedish author set in Sweden so if you are reading around the world this could help you.