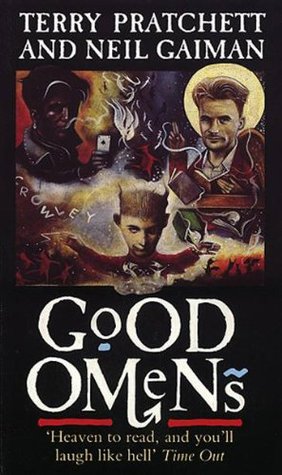 If you weren’t aware that Amazon Prime Video had adapted Good Omens for a 6 part series where have you been?!

I first read Good Omens back in the 1990s and I remember loving it (in fact this is one of the rare books that earned a place on my keeper shelf) so when I heard about the adaptation I knew it was the perfect time to revisit the End of the World and to see how it holds up in the present day.

Having read and watched simultaneously I can confirm that with one major exception (we will come to this) the adaptation is true to the book in fact whole scenes are quoted word for word.

For me this is one of those really rare occasions where the adaptation actually beats the original book and this is for various reasons explained below.

What the adaptation does really well is diversity. I love the fact that the voice of God is female, that 2 of the 4 “horsemen” are actually women and that Beezlebub is also a woman. The show also features actors from different nationalities and it is this that brings the story right up to date as dare I say it the book is rather white in terms of characters.

The adaptation actually develops some of the ideas that only get a passing mention in the book. (Atlantis, the Aliens, the Angels and the Demons) it has great visuals which really bring events to life.

The best thing for me about the adaptation is the cast, the casting is fantastic. I love the way the relationship Aziraphale and Crowley is shown, how over the 6000 years they become close. It manages to have that will they won’t they romantic feel without actually stating anything beyond the fact that Angels and Demons are asexual (really, not sure I am buying that) this is a fantastic Bromance. While Tennant and Sheen are amazing the secondary characters really add to the show I love Miranda Richardson as Madam Tracy and Jon Hamm as Gabriel. In fact Hamm got the best line of the show you will have to watch to find out what it is.

The one area where the adaptation really differs from the book is the ending, normally I would hate this but with this adaptation it really fits. The ending of the book is kept largely intact however there is an additional sequence which occurs after the book has ended and this really does add something to the story and the character relationships.

The adaptation also features many hidden gems including Terry Pratchett’s hat and a Cameo by Neil Gaiman himself. There are various websites where you can learn about the Easter Eggs hidden within the adaptation but for me the best way to discover them is to watch the series.

If you haven’t watched this what are you waiting for?

What do you think does the book beat the adaptation or do you agree with me?