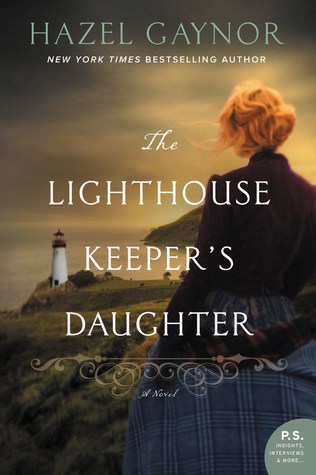 This ARC was provided by Harper Collins UK (via NetGalley) in exchange for an honest review.

Synopsis from Goodreads: “They call me a heroine, but I am not deserving of such accolades. I am just an ordinary young woman who did her duty.”

1838: Northumberland, England. Longstone Lighthouse on the Farne Islands has been Grace Darling’s home for all of her twenty-two years. When she and her father rescue shipwreck survivors in a furious storm, Grace becomes celebrated throughout England, the subject of poems, ballads, and plays. But far more precious than her unsought fame is the friendship that develops between Grace and a visiting artist. Just as George Emmerson captures Grace with his brushes, she in turn captures his heart.

1938: Newport, Rhode Island. Nineteen-years-old and pregnant, Matilda Emmerson has been sent away from Ireland in disgrace. She is to stay with Harriet, a reclusive relative and assistant lighthouse keeper, until her baby is born. A discarded, half-finished portrait opens a window into Matilda’s family history. As a deadly hurricane approaches, two women, living a century apart, will be linked forever by their instinctive acts of courage and love.

Book Worm’s Thoughts: This was a solid 3 star read for me. There is nothing earth shattering about the narrative technique in fact I think the weaving of 2 separate timelines to tell 2 separate but related stories has become commonplace nowadays, that said I liked the characters in both timelines and the way their shared history is weaved together through family heirlooms.

The main focus of this story is a real life lighthouse keeper’s daughter called Grace Darling who rose to fame in 1838 when she and her father rescued shipwrecked survivors during a fierce storm, the fact that she was a woman lead to huge public interest in the story and for a while Grace became the centre of her own storm of fame. Gaynor uses this dramatic woman and the stories surrounding the real life rescue to create her fictional family.

Gaynor successfully weaves the real life facts of Grace’s life into her narrative and creates a warm and sympathetic character that the reader can believe in. Grace’s family and friends also feel like real people and the detail with which lighthouse life is described almost made me long for my own island with only family and a Kindle for company. Then reality hit and I thought great in summer not so good in winter.

For me Grace’s story was the real draw of the book the secondary storyline felt like it had been added to give some extra colour and personally I don’t think this extra colour was required. While I don’t feel this secondary narrative was necessary to the book it did still manage to tug at my heartstrings and it did allow the introduction of other historical female lighthouse keepers to show that while Grace may be one of the most famous there were other women doing the same thing in other places.