No One Home by Tim Weaver 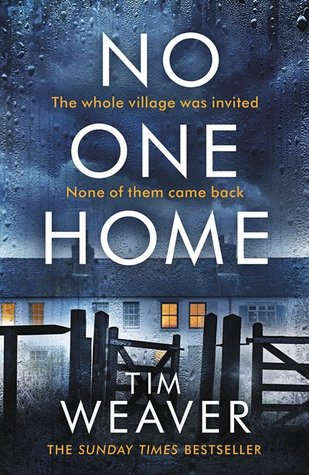 Synopsis from Goodreads: On Halloween night, four households gather for a party in the tiny Yorkshire village of Black Gale. Three hours in, they head outside, onto the darkened moors, to play a drunken game of hide and seek. None of them return. There’s no trail, no evidence and no answers. An entire village has just vanished.

With the police investigation dead in the water, the families of the disappeared ask missing persons investigator David Raker to find out what happened. But nothing can prepare him for the truth.

Book Worm’s Thoughts: Having read the description I was excited to see how these mystery disappearances turned out. I loved the premise of the book the 9 villagers all disappearing at the same time on Halloween never to be heard from again and no trace of them discovered in 2.5 years. Was this a planned disappearance and if they had planned it what was the reason behind it or was this something far more sinister. Enter Raker to discover the truth.

There is not a lot more I can say without spoilers other than that I enjoyed seeing all the dead ends the police and Raker find and the resolution as to why nothing was discovered until Raker stepped in.

As a disclaimer I will say I felt this could have been a shorter book and that the story did get rather convoluted.

This is book 10 in a series and there are references back to events from previous books however if you don’t mind not reading a whole series this pretty much stands alone.

Who would like this? I would recommend this to fans of the Raker series and those looking for a mystery with a difference.

Like Loading...
From: Uncategorized
← The Farm by Joanne Ramos
Read Around the World: Oman →
No comments yet