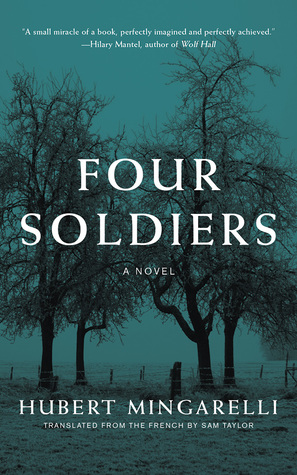 Synopsis from Goodreads: Hubert Mingarelli’s simple, powerful, and moving stories of men in combat have established him as one of the most exciting new voices in international fiction.

In Four Soldiers he tells the story of four young soldiers in 1919, members of the Red Army during the Russian civil war. It is set in the harsh dead of winter, just as the soldiers set up camp in a forest in Galicia near the Romanian front line. Due to a lull in fighting, their days are taken up with the mundane tasks of trying to scratch together what food and comforts they can find, all the time while talking, smoking, and waiting. Waiting specifically for spring to come. Waiting for their battalion to move on. Waiting for the inevitable resumption of violence.

Recalling great works like Isaac Babel’s Red Cavalry, Ernest Hemingway’s A Farewell to Arms, and Stephen Crane’s The Red Badge of Courage, Four Soldiers is a timeless and tender story of young male friendships and the small, idyllic moments of happiness that can illuminate the darkness of war.

Tracy’s Thoughts: I’ve been trying to avoid war stories lately, but this was more about the brotherhood of soldiers than about war. The characters were drawn in a general way- the reader gets an idea of their personalities, but the story is about how this group of (actually) five soldiers get along and how they spent their down time, waiting for warmer weather so they could march again. The time is 1919, Russian Revolution, but it feels like it could be anytime, and the setting was described beautifully. The minutiae were what mattered to these illiterate men, what made them feel unique in an army. I liked the minimal writing style, too.

Like Loading...
From: Uncategorized
← MBI 2019 The Death of Murat Idrissi by Tommy Wieringa
MBI 2019 Longlist: The Faculty of Dreams by Sara Stridsberg →
No comments yet