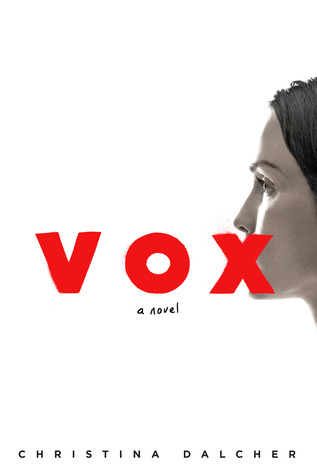 This ARC was provided by HQ (via NetGalley) in exchange for an honest review.

Synopsis from Goodreads: Set in an America where half the population has been silenced, VOX is the harrowing, unforgettable story of what one woman will do to protect herself and her daughter.

On the day the government decrees that women are no longer allowed more than 100 words daily, Dr. Jean McClellan is in denial—this can’t happen here. Not in America. Not to her.

This is just the beginning.

Soon women can no longer hold jobs. Girls are no longer taught to read or write. Females no longer have a voice. Before, the average person spoke sixteen thousand words a day, but now women only have one hundred to make themselves heard.

But this is not the end.

For herself, her daughter, and every woman silenced, Jean will reclaim her voice.

Book Worm’s Thoughts: If I had to sum this book up in one word it would be “terrifying” if I had to sum it up in under 100 words it would be “look at what is happening in the world now and then tell me this could never happen. If you are lucky enough to live in a country where you have a voice and a vote this book explains exactly why you need to use them”

This book is terrifying because I fully believe that given the right circumstances this vision of America could be a reality and for those who say no way that couldn’t happen let’s look at it step by step:

Dalcher makes the point that this subjugation could not have occurred with only male support it also needed the support of at least some women otherwise it could never have happened. Dalcher also shows that while it is men who benefit from this situation it is not only women who think that the situation is wrong. There are men and women on both sides of the spectrum.

I really liked the way that language was used as a weapon and control method. I think it is a timely reminder that speaking out is a powerful thing and that we should not let ourselves be silenced no matter what form that silencing takes.

While I think this book has a strong message it is not without it flaws and while I do think the situation is possible the speed with which events happen felt rushed. Changes like this would take time and co-ordination to organize they would not occur overnight which is how the book portrays the final takeover.

I also felt the ending was too neat the conflicts were tied up nicely with a bow while I think they could have benefited from leaving some things unresolved as real life is messy.

Who would like this? I would recommend this to fans of dystopian fiction like The Handmaid’s Tale and The Power. I would add the proviso just go with the central message and ignore the short comings.

Want to try it for yourself? You can find a copy here: [Jen will add amazon link]