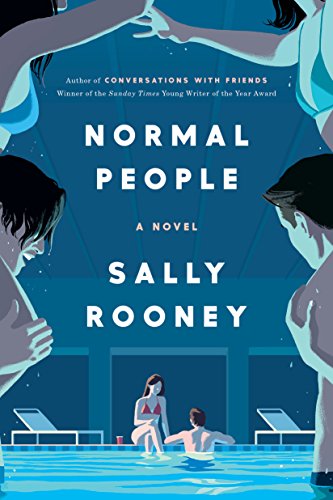 Synopsis (From Amazon): Connell Waldron is one of the most popular boys in his small-town high school–he is a star of the football team and an excellent student, and he is never wanting for attention from girls. The one thing he doesn’t have is money. Marianne Sheridan, a classmate of Connell’s, has the opposite problem. Marianne is plain-looking, odd, and stubborn, and while her family is quite well off, she has no friends to speak of. There is, however, a deep and undeniable connection between the two teenagers, one that develops into a secret relationship.
Everything changes when both Connell and Marianne are accepted to Trinity College. Suddenly Marianne is well liked and elegant, holding court with her intellectual friends, while Connell hangs at the sidelines, not quite as fluent in the language of the elite. Throughout their years at university, Marianne and Connell circle each other, falling in and out of romance but never straying far from where they started. And as Marianne experiments with an increasingly dangerous string of boyfriends, Connell must decide how far he is willing to go to save his oldest friend.

Book Worm’s Review: Unfortunately I didn’t really enjoy this book, I disliked both central characters and come the end I really couldn’t have cared less whether or not they got together.

The narrative is told in switching viewpoints: his and hers. We move forward in time and then remember back to where the previous narrative left off, a technique that I have come across in several previous books I have read so nothing unique there. Personally I found the writing run of the mill it didn’t speak to me and it certainly had none of the magic other longlist books have.

In terms of character and plot, I felt this book went nowhere we see the central characters face various issues, misunderstand each other, and find each other ad infinitum in a endless cycle that appears to get more destructive as time goes by.

I will give the author full credit for tackling tough issues, for highlighting that mental health issues can affect anyone, that family problems don’t just occur in poor families, that school can be a difficult period for even the most normal teenagers, and that sexuality and sexual pleasure come in all shames and sizes there is no right and wrong.

Overall I have no idea why this made the longlist.

Lisa’s Review:  I’m still trying to figure out how I feel about Normal People. I enjoyed reading it. I recognized the insecurity about relationships that I think is prevalent in the young adult years – an insecurity made worse in the context of an abusive home life. I cared about the characters and as a psychologist I wanted to help them see how much they cared about each other. I can also understand how their deep connection was frightening to them. I could appreciate how class differences played into the main characters’ different experiences and understanding of each other.

So what is my hesitation? Perhaps it is that even though the novel did touch on issues of class, it was really about a relationship between two young people rather than about “big” issues like politics, race, war. However, as I reflect on that, that is not a fair criticism. In depth exploration of human relationships is a vitally important purpose of literature. Even in-depth exploration of the relationships of two young adults. In the end, I think the fair criticism that I have is that the book, although quite good, did not reach the level of extraordinary on any of the aspects on which we are judging the books. In particular, the topic and story reminded me a lot of books by Rainbow Rowell, thus losing points for originality. I would recommend this book as an interesting one to read, I just don’t think it rises to the level of Mann Booker winner.

Jen’s Review: My view is similar to Lisa’s perspective. Unlike Book Worm, I did feel great empathy and connection for the main characters and I agree with Lisa that in-depth exploration of human relationships can be an important purpose of literature. In many ways this book reminded me of A Little Life (except no where near as good) in the ways the author focused on how two damaged people came together and related to each other. Like Book Worm, I didn’t particularly enjoy the book either. I found it exhausting – the constant cycle of on again, off again relationships. The book made me feel gloomy and drained. There was so much angst and  self loathing that I found it to be a struggle to read at times.

I did think it was well written and the style matched the subject matter and characters. While the extent of the relationship issues wasn’t something I have ever experienced, I did feel like Rooney did a good job of capturing experiences of young adults and teenagers. Some of the scenarios described when the two main characters were in high school touched close to home – the need for approval, wanting to fit in and be liked, and so forth. I think it was a fairly solid read, but once again I’m also left wondering how it made the list over other books.

So there you have it. We’ve completed the longlist and below is our ranking of all the books. Later today we’ll be posting our overall thoughts about the longlist. Tomorrow morning we’ll post our short list predictions (my shortlist prediction list looks quite different from our panel rankings).

We want to hear from you. Have you read the book? What did you think? Does it deserve to make the shortlist? Why or why not?

Like Loading...
From: Uncategorized
← 2018 Man Booker Longlist: In Our Mad and Furious City
2018 Man Booker: Longlist thoughts →
No comments yet