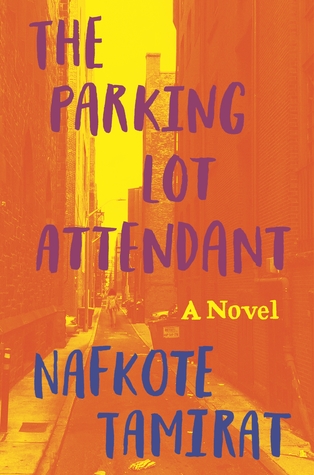 It’s not often that a book leaves me with such conflicting feelings. This debut by Boston author Nafkote Tamirat is a coming of age story set in Boston and an unnamed tropical island. It’s the sort of book that left me with many questions and a mix of reactions. Here’s my review…

This book was provided to me by Henry Holt & Company through Netgalley in exchange for an honest review.

The Parking Lot Attendant has been getting a lot of buzz in critics circles. The novel begins with the unnamed young teenager at the center of the novel living as a refugee with her father on a tropical island. All is not well on the island. The refugees appear to be waiting for transfer to Africa and the young woman is not looked upon favorably by her fellow refugees. The majority of the novel takes us through the events that led up to the woman and her Ethiopian-born father’s current situation.

The young woman at the center of the novel is abandoned by her mother and raised by her father who reappears in her life after 6 years absence. The majority of the novel is set in Boston and details the coming-of-age of the young protagonist who becomes enthralled by an older man, Ayale, who works as a parking attendant in Boston.

I enjoyed parts of this book while other parts left me feeling flat. The writing was excellent and I’m convinced that we’ll be seeing a lot more of this author. The beginning of the book drew me in and I felt invested in the life and story of the protagonist. The writing style was appealing with a mix of humor and intelligence that I appreciated. As someone who lives in the Boston area, I found the descriptions to be authentic and engaging.

The most compelling aspect of the book, for me was the developing relationship between the young woman and the mysterious and charismatic Ayale. These sections felt genuine and were engaging. Ayale was a compelling character and I wanted to know more about his motivations and life experiences. However, at a point, the plot veered into an almost magical fantastical direction (as they moved onto the island) and I lost interest. It was almost as if I was reading two different books and I found myself confused and lost — like a lot of the symbolism/metaphorical pieces were going over my head. I felt like there were a lot of loose threads, inconsistencies, and over-the-top plot lines for my tastes.

The characters in the book were mostly Ethiopian (first or second generation) which appealed to me when reading the synopsis since I figured that there would be a strong focus on the immigrant experience in America. That wasn’t really the case for this book which was focused more on the coming-of-age experiences of the protagonist than it was on any in-depth cultural exploration or analysis.

I ended up giving this book 3 stars because I do think the writing was very strong and I really enjoyed the first half of the book. While second half went off the rails for me, I think the author is clearly a talented writer and is someone who will be worth watching. I think the book will appeal to readers who enjoy coming-of-age stories and stories that stretch the boundaries of the imagination.

Want to try it for yourself? You can find/buy your copy here: The Parking Lot Attendant

We want to hear from you! Have you read this book? What did you think? Does it sound like the sort of book you want to read?