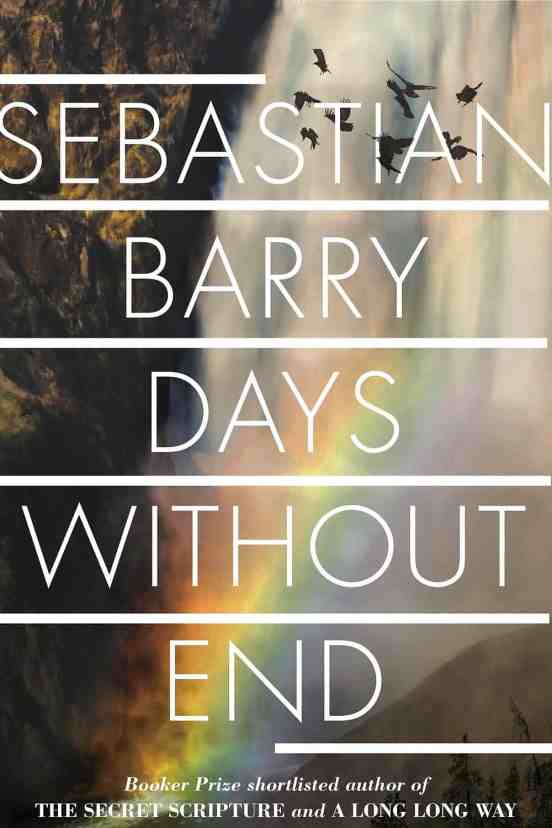 Book 3 for our shadow panel is Sebastian Barry’s Days Without End. Once again, our panel reviewed the book on the following criteria: 1) writing quality; 2) originality; 3) character development; 4) plot development; and 5) overall enjoyment. We’ve each provided mini-reviews and ratings. We hope you join in by adding your thoughts about the book too. Here are our ratings…

Synopsis (from Amazon): Thomas McNulty, aged barely seventeen and having fled the Great Famine in Ireland, signs up for the U.S. Army in the 1850s. With his brother in arms, John Cole, Thomas goes on to fight in the Indian Wars—against the Sioux and the Yurok—and, ultimately, the Civil War. Orphans of terrible hardships themselves, the men find these days to be vivid and alive, despite the horrors they see and are complicit in.

Moving from the plains of Wyoming to Tennessee, Sebastian Barry’s latest work is a masterpiece of atmosphere and language. An intensely poignant story of two men and the makeshift family they create with a young Sioux girl, Winona, Days Without End is a fresh and haunting portrait of the most fateful years in American history and is a novel never to be forgotten.

Book Worm’s Review:  I found it really hard to get into this story, and some parts of it were so dull I found my mind drifting and my eyes closing. Given the subject matter, I expected more from this, and sadly for me it didn’t deliver.

The story is original in that the narrator is both gay and a cross dresser in the United States army and he has found love with another member of the army. As the novel progress we see the narrator develop from a boy into a man who is more comfortable in a traditionally female role of wife and mother and it is interesting to watch that character development.

The parts of the plot I found most interesting were the parts outside of army life when the men could be who they really were and embrace a life of show business and play acting, for me it was a real shame the fighting got in the way of these sections.

Jen’s Review: If you read my blurb in the “meet the panel” post, you’ll know that one of my least favorite genres is Western novels and I typically dislike (or am disinterested in) books featuring exclusively white men. Well this book was a Western (of sorts) and mainly featured white men, but I ultimately liked it more than I would have thought possible. It did take a while for me to become engaged in the story and at times it didn’t feel like very genuine to me – I had a hard time believing how accepting many of the male characters were of an openly gay relationship in the 1800s.

I loved the fact Barry wrote about a homosexual couple and I loved that Barry was inspired to write this relationship by his son. The relationship between the two protagonists which was quite touching and my favorite part of the book. So while I didn’t find the overall narrative structure or content particularly novel, I did find this focus was novel and not something I’ve seen before in this genre. I didn’t particularly care about the cross-dressing piece because it felt over the top in the context of this book which had already packed in so many elements that it didn’t feel needed here.

For me (based completely on my personal tastes) there was too much detail about the war and fighting. I did enjoy the way that Barry highlighted all the conflicting feelings and ethical dilemmas involved in war. The writing was stellar and sentences were so well crafted that I had major writer’s envy. I also enjoyed the emotional highs and lows of the books: there were moments that were subtle and emotionally touching and others that were brutal in their despair and violence. Finally I took one point off for character development because outside of the main character, I didn’t get a deep picture of the other main characters. And last but not least, this was the sort of book that grew on me as I read. I took off one point for enjoyment b/c I did feel quite bored at the beginning but the more I read, the more I enjoyed it.

Lisa’s Review: When I first started reading this book, I really did not like it. It is about men and war, and has little dialogue. It was the book without end. However, over time, I started to appreciate the beauty of the writing, including the descriptions of the brutality of the battlefield. I do not know a lot about the history of the U.S. army and killing of Native Americans, but what I read rings true.  And, over time, I found that I cared about the narrator – this man who has found a way to create his own unconventional family and express his true self. I liked how this occurred in a way that is completely divorced from modern conceptualizations of what it means to be LGBTQ and the politics associated with this label. This is a book more about atmosphere and description than about plot, so I did not give it full points for plot. I also only gave 1 of 2 points for overall enjoyment because it took such a long time for my enjoyment to develop.  But, overall, I would say hang in there, and don’t read it in a rush (as I did.) Take time to enjoy the language.

Nicole’s Review:  I’m super conflicted here.  The writing was so stellar I want to contribute more points to writing quality to make up for some of the other lower scores.  It was impossible not to think about Brokeback Mountain while reading this book, and so from that perspective, for me, originality suffered.

I liked so much about this book and was pulled in right from the beginning.  There were lines which were such perfection I had to stop and listen to them again (speaking of listening, the narrator of the audio was fantastic.  I haven’t figured out bookmarks in Audible, but there was something about cornbread which may have been the best line in the book.)

I think the book was trying a bit too hard to be too many things.  Some decisions made on some “close calls” which just weren’t realistic for the time period, and ultimately we only really ever got to know one character with any depth.  For me, those are the areas it suffered and kept it from being GREAT.    Thematically and the writing certainly made it a contender for the short list, the flaws, however, should preclude that.

Average score across all panelists: 16/20

Have you read the book? What did you think of it? Should it make the shortlist? Why or why not?

Our Collective Ranking of Longlist books to date:
1. Lincoln in the Bardo by George Saunders: 16.8/20
2. Days Without End by Sebastian Barry: 16/20
3. Underground Railroad by Colton Whitehead: 13.9/20

Up next: Swing Time by Zadie Smith