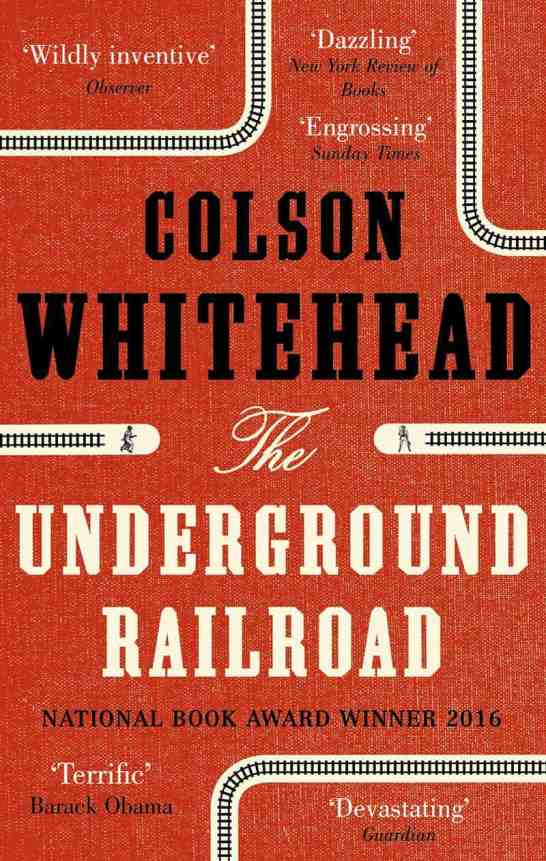 It’s officially time to begin our shadow panel reviews. For those of you who don’t know us well, each year we gather a group of panelists to do a shadow panel of the Man Booker longlist books. Our panel collectively reviews all the books on the longlist and at the end of the month we will make our predictions. Each week we will post 2-3 reviews with our ratings.

Our panel reviews each the book on the following criteria: 1) writing quality; 2) originality; 3) character development; 4) plot development; and 5) overall enjoyment. We’ve each provided mini-reviews and ratings. We rank books using that criteria to produce an “objective” ranking of our top 6 books.

Synopsis (from Amazon): Cora is a slave on a cotton plantation in Georgia. Life is hell for all the slaves, but especially bad for Cora; an outcast even among her fellow Africans, she is coming into womanhood—where even greater pain awaits. When Caesar, a recent arrival from Virginia, tells her about the Underground Railroad, they decide to take a terrifying risk and escape. Matters do not go as planned—Cora kills a young white boy who tries to capture her. Though they manage to find a station and head north, they are being hunted.

In Whitehead’s ingenious conception, the Underground Railroad is no mere metaphor—engineers and conductors operate a secret network of tracks and tunnels beneath the Southern soil. Cora and Caesar’s first stop is South Carolina, in a city that initially seems like a haven. But the city’s placid surface masks an insidious scheme designed for its black denizens. And even worse: Ridgeway, the relentless slave catcher, is close on their heels. Forced to flee again, Cora embarks on a harrowing flight, state by state, seeking true freedom.

Jen’s Review: I did not think The Underground Railroad would make the Man booker longlist. Don’t get me wrong, Colson Whitehead is a talented writer and I think the book covers important content but I’ve read quite a few fiction books about slavery and I didn’t find that this one added anything new (that I hadn’t learned or felt from other books).  For me it is one of many important books written about slavery (books that are needed and are important as a collective) but it doesn’t stand out as being particularly unique. For me the book was a solid 3.5 star read. I think people should read it, I just don’t think it’s the best book of the year. That said, it did make my top ten list from 2016 so my feelings about it have clearly changed over the year.

The main issue for me with the book was the fact that I felt like the magical realism elements — the creation of an actual railroad– didn’t feel particularly well integrated into the book and felt gimmicky rather than an integral part of plot development. This irritated me because I loved the concept, I just failed to see how this element enhanced the central message of the book. In sum, I did like this book but not enough for me to have added it to the longlist. It’ll probably make the shortlist because everyone else (except this panel) seems to think it’s the perfect book.

Nicole’s Review:  Some time has passed since I read this book, and as I reflect I get more annoyed.  We can’t right the wrongs of the past by overcompensating with every book written about slavery.   This was a solid book, for me — not more.  In fact if I compare, I found last year’s Homegoing a more wrenching and unique portrayal.

I don’t think this book is necessarily suited to audio. Maybe it was just me, but I had to start it several times before I could make enough progress to begin to enjoy it. And I use the term “enjoy” loosely. The most accurate review of this book is “people are a-holes.”

It was a good story, fairly well-told. I don’t think there was anything particularly original about it. And sometimes the structure was off-putting. Without having read it it’s hard to tell, but I’d be listening along and then all of a sudden there’d be a brief foray into another character, and I’d think I’d drifted and had to go back and find out it was only a foray.

I’ve mixed feelings about Whitehead. This book made me think for sure, and he really made me feel what it must have been to be treated so sub-humanly, but I personally don’t think this book in and of itself was Pulitzer/National Book Award/Booker worthy. It was a very good take on a very known story.

Lisa’s Review: There are many aspects of The Underground Railroad that make it a good book. I really enjoyed the plain, straightforward writing style. It’s very easy to dive into and become absorbed. The depiction of life on the plantation did not shy away from brutality. I appreciated the creative use of different “solutions” to management of African Americans in different states. I also liked reading the backstories of various characters who touched the life of Cora, the main character. However, there are other choices that the author made that may have decreased the power of the book. For example, at the end of the book, we read about Mabel, and how she ultimately chose to be with her child but then was not able to. This feels like the author just wanted to wrap up that plotline, and inject some hope into the book. I don’t think that was necessary.  Also possibly unnecessary: having the underground railroad be an actual railroad. I kept thinking about how people could possibly have built a physical railroad without others above ground knowing something was going on.  I took points off for character development as I don’t think that Cora changed much over the course of the book. I also took one point off for originality, as many aspects of the story show up in other books – runaway woman hiding in the attic; woman fleeing from place to place. All in all, I thought this book was good but not great.

I know this is a work of fiction but I felt that even then some events were overly melodramatic. That said, I am not a resident of the USA and that makes it difficult for me to gauge how much of the treatment of slaves portrayed in this book was factual and how much was artistic license. I would like to think a lot of it was exaggerated but we only need to look at recent history to know the horrors the human race is capable of inflicting.

I was intrigued by the idea of an actual underground railroad and how that would work but it was more of a footnote in the narrative than the actual focus of the narrative. While I think the idea is original it was never fully realised and I was left with so many questions like how did they get rid of all the earth with no-one noticing, how did the get the bricks, track etc and why once one station was discovered did the bad guys not just follow the already made tunnels to find the whole network?

As a book, focussing on the life of one runaway slave this was compelling reading and I was totally invested in Cora and her life. For me this was a solid 4 star read.

Anita’s Review: An uneven effort, and one getting a whole lot more acclaim than I believe it deserves. The story does a very good job of painting the picture of the abysmal hopelessness of being a slave. The main narrative is interspersed with short chapters about other characters or historical incidents as well.  This approach to intersperse Cora’s story with these short chapters didn’t really bother me, but I don’t think it enhanced the story or was a necessary structural element.  It made me feel a bit arms length from Cora’s story which is the emotional heart of the book.  Just as I was starting to feel her pain, the story would stop, and the author takes us elsewhere.

My second issue is I didn’t find the characters to be especially well developed.  The scenes are written well, and you can picture the settings.  But most of the characters are not fleshed out well enough to deeply care about them.  Some are barely sketched out at all.  People are laying down their lives to help Cora, and yet, with few exceptions, you don’t feel like you get to know them well enough to really care.  I was rooting for Cora, but more because the horrific situations of slavery she had to endure are so awful that any human would cringe at thought of them.

My final issue with the book is the Underground Railroad itself.  It’s an actual railroad. It didn’t make the book more powerful.  It didn’t really illuminate the actual underground railroad is some way.  It seemed pointless to inject this element of magical realism.  It simply didn’t add anything.  Just a way to show shifts in time and place, but if you name the book after it, I expect more.

Have you read the book? What did you think? Do you think it deserved to make the longlist? Should it make the shortlist? Why or why not?

Our Collective Ranking of Longlist books to date:
1. The Underground Railroad

Next up: Lincoln in the Bardo by George Saunders