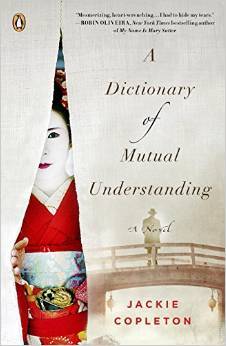 This is another book I had predicted would make it on to the Man Booker long list, sadly Jen has informed me that this is not possible as it was published too early to qualify. Looks like I won’t be winning the predictions league.

Synopsis from Goodreads: In the tradition of Memoirs of a Geisha and The Piano Teacher, a heart-wrenching debut novel of family, forgiveness, and the exquisite pain of love

When Amaterasu Takahashi opens the door of her Philadelphia home to a badly scarred man claiming to be her grandson, she doesn’t believe him. Her grandson and her daughter, Yuko, perished nearly forty years ago during the bombing of Nagasaki. But the man carries with him a collection of sealed private letters that open a Pandora’s Box of family secrets Ama had sworn to leave behind when she fled Japan. She is forced to confront her memories of the years before the war: of the daughter she tried too hard to protect and the love affair that would drive them apart, and even further back, to the long, sake-pouring nights at a hostess bar where Ama first learned that a soft heart was a dangerous thing. Will Ama allow herself to believe in a miracle?

Book Worm’s Thoughts: This book made it onto the Bailey’s Longlist this year and it was well deserved. I loved everything about it, hence the rare 5-star rating.

Each chapter opens with a definition of a Japanese word or phrase which relates to what is going to happen in the chapter. These definitions also give insight into Japanese culture and what they as people value most. The book and in particular, these definitions reveal a complex society with honour at its centre and help us understand why the characters act as they do.

The key event of the novel is the dropping of the atomic bomb on Nagasaki and how it destroys a family’s hope for the future. One of the central themes of the novel is the contemplation of how would life have turned out if things had happened differently, not just on August 9th 1945, but also in the recent and distant past. Another key theme is love, not just the kind and forgiving sort of love, but also the passionate, selfish and self destructive kind of love. The characters end up where they are due to the consequences of love.

The novel also contains harrowing descriptions of how Japanese doctors treated Chinese prisoners of war and there are  vivid descriptions of the kind of injuries and long term health issues faced by those who survived the initial explosion. I think it is important to see this in vivid detail in the hope that it will make people pause and think “never again”.

What I really liked about the novel is that nothing is black and white. Even the ending leaves room either for doubt or belief depending on how you read the novel.  and that is something that will stick with me for a long time to come.

“This was the survivor’s sorrow, people expected you to be grateful”

“This country was shelter from pikadon but it was not home, the people were not my own, I did not want to get close to them.”

“Although I was too high up, too far away, too sheltered within that dark grocery store, I was close enough to know what the end of existences sounds like.”

“There can be no word for what we heard that day. There never must be. To give this sound a name might mean it could happen again. What word can capture the roar of every thunderstorm you might have heard, every avalanche and volcano and tsunami that you might have seen tear across the land, ever city consumed by flames and waves and winds? Never find the language for such an agony of noise and the silence that followed.”

“His face can tell nothing, other than that day of August 9, 1945. I wanted to give him more than one day. Was that cruel of me?”

Who would like this? I would recommend this to anyone with an interest in Japanese culture and the events of Nagasaki. It will also appeal to those who enjoy a moving family story of hope and redemption.

Want to try it for yourself? You can find a copy here: Dictionary of Mutual Understanding