Colorless Tsukuru Tazaki and His Years of Pilgrimage by Haruki Murakami 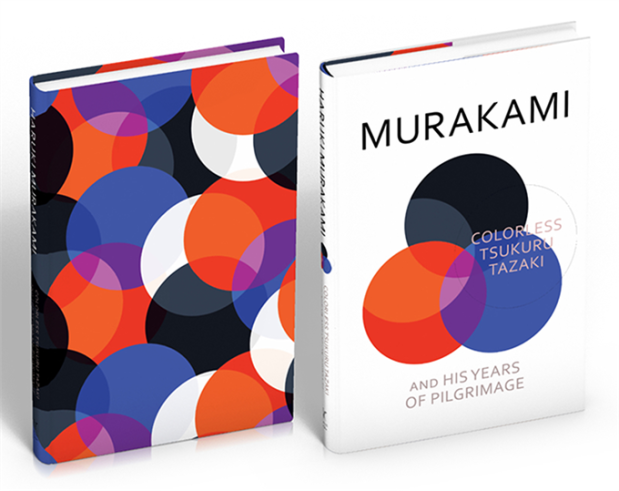 I’m finally back on track! After close to a month of reading very little literary fiction and too much “escapist” fare, I finally got around to reading a book that I can actually review for this blog. Today’s book has been sitting on my TBR shelf at home for a while so it’s about time. Keep reading to see what I thought, although those of you who know me well can probably guess.

It’s no secret that I love Murakmi’s work (you can check out our featured author post on Murakami here). This novel is more along the lines of Norwegian Wood than his “traditional” works in its seeming simplicity (for a Murakami novel) and lack of magical elements. I say “seeming” because the book is only simple on the surface. It has great depth below the surface. Readers who want to try Murakami but dislike magical realism should start with either this one or Norwegian Wood.

Colorless Tsukuru Tazaki follows the story of Tsukuru Tazaki, a young man whose name means “to make.” In some ways it’s a coming-of-age story, but it’s a Murakami-esque coming-of-age story complete with loose ends and unresolved questions. We first encounter Tazaki as a lonely man in his late thirties who seems to be lacking something in his life. The book jumps around in time and also has some quirky stories nested within the main storyline.

As a teenager, Tsukuru reveals that he was part of a close knit group of friends and they were as close as “five fingers on a hand.” However, even as part of this group, Tsukuru was filled with self-doubt. Each of Tazaki’s four friends have names that translate at least in part into a specific color. Tsukuru is the only member of the group whose name has no link to color and his friends jokingly refer to him as colorless Tsukuru – a fact that he interprets being lacking in some significant way. Tsukuru sees himself as ordinary and uninteresting and he is convinced that others see him this way too. When he is suddenly shunned from his close-knit group, his self-doubts are confirmed. What follows, is an exploration of why Tsukuru lost his friends and an examination of how he became the person he is at age thirty-eight.

No one does themes of isolation and alienation quite like Murakami. They are the themes that run through many of his books and, while he often leaves unanswered questions, he is an expert at eliciting an experiential connection with these themes. We, the readers, feel Tsukuru’s pain and confusion. The book is realistic in that there are no mystical talking cats or alternate worlds, but there is a dream-like quality to everything. In fact, dreams play a large role in the plot and are used  in similar ways that you might imagine come up in psychoanalysis.

I enjoyed the book although I felt like something was missing in translation. I think language was important here since many of the words had meaning in Japanese that could not adequately translate to English in the same way (the names translating into colors, the use of the honorifics in Japanese that don’t exist in English). I loved the use of color throughout the book and how it (or lack of) became a metaphor for Tsukuru’s own sense of alienation and isolation.

Although this book wasn’t quite like Murakami’s signature magical realist fare, it had his stamp all over it. There was the dream-like quality, the use of music, literary references, and bizarre sexual scenes for which his books are famous. This book was nominated for the Bad Sex in Fiction Award (yes, there is such a thing). I’m surprised most his books don’t make it onto that list since I’ve often found sex in his books to very bizarre although consistent with the rest of his novels.

Music plays an important role and the novel could be considered to have a signature piece: Listz’s Le Mal du Pays. The title translates to homesickness. I listened to the piece while reading the novel and it was a perfect fit for the tone and emotion behind the book: hauntingly beautiful and melancholy. I tried to play this on the piano for the blog but was a little rusty (but I feel inspired to learn it). You can listen to exact rendition referenced in the book along with the sheet music here:

All in all I found Colorless… to be a very satisfying novel that I enjoyed very much. Murakami’s novels are very much about the experience of reading them and being taken down a number of paths than they are about a linear plot progression that gets you from A to B. His books are not for those that require all their knots to be tied. His books are filled with ambiguities and often end with little true resolution, leaving the reader to fill in the blanks. This book was no exception. There is no neat ending and lots of questions remain unanswered. If you want to try it for yourself, you can find a copy here: Colorless Tsukuru.

We want to hear from you. Have you read this book? What did you think? If you haven’t read it, do you think it is one that will appeal to you?