On the Road – The Secret Chord – Geraldine Brooks

I was fortunate enough to get to visit Israel this past November, and as I was standing in front of King David’s Tomb I realized I didn’t really know anything about him.  A friend posted a review of The Secret Chord and I knew it was the perfect book to educate me.  (I love Biblical fiction, but struggle reading the actual Bible.)

It wasn’t long before it clicked that this was David of “and Goliath” and “and Bathsheba” fame.

I love ancient history and I think that’s one of the reasons Biblical fiction is so appealing to me.  I learned so many interesting things about David, which most of you probably already know, but which were news to me.  Like, he wrote a bunch of the Psalms.  I won’t say too much about him because I don’t want to ruin the story for those not in the know, but let’s just say, he was a maniac.  He is also the first man in “literature whose story is told in detail from early childhood to extreme old age.  Some scholars have called this biography the oldest piece of history writing… ”  Kind of makes me want to read the bible.  Kind of.

As you may already be able to tell, I don’t have a religious affiliation.  My feeling is live and let live, and if it works for you, great.   That being said, visiting Jerusalem was a profound experience. 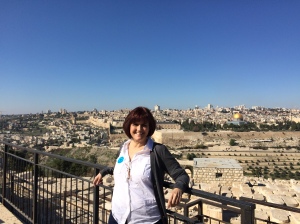 It’s a beautiful ancient city, with history out the kazoo.  Most of our city tour was focused on Jesus.  The Last Supper, the Crucifixion, Via Dolorosa. But I found learning about the city so much more interesting in reading this book about David.  Jerusalem was already well established by the time Jesus got there.

What’s fascinating to me about J-town is that it is tiny, and yet every world religion is represented there.  The Temple Mount is in the distance in this picture (gold dome) and it is a significant Holy Place for Christianity, Judaism and Muslims.  It’s hard to understand how that can be.  Kind of like it’s hard to understand how Jerusalem can be.  (Incidentally, J-Town is so powerful it has its own syndrome with a specialized institution to treat it!)

Since the beginning of recorded history, there has been fighting over this land.  David conquered the Palestinians, and Jordanians – (spoiler alert?) invaded  Jerusalem, made it his, and expanded the city to include Temple Mount (then Mt. Zion.)  I’m not saying he built the walls around the city, that was done by Herod, but he certainly enjoyed the walls. Hmmm … Power hungry, megalomaniac, who likes walls …. Why does that sound so familiar?

View of Jordan across the Dead Sea

Perhaps David was the first victim of Jerusalem Syndrome.

What I find so interesting about Jerusalem itself is its perseverance.  Again, every major world religion has a presence there and somehow they haven’t torn each other (or the city) apart.  I won’t say they live in peace, but somehow they co-exist.  If it can happen in the most hotly contested land in the world, I believe it can happen anywhere.

Bullet holes in the Zion Gate

Oh yeah, the book.  The book was great.  5-star read for me.  I thought Brooks did a really good job with the story.  I googled a number of the parts of the story as I was reading, and I don’t think there was much deviation from the bible story.  It was well-written and interesting, and certainly a worthy read. I feel like I got a very comprehensive understanding of David’s life, and look forward exploring more about his successor Solomon who may or may not have mines, and something about splitting a baby in half.

As for Israel, it’s dangerous there, but I highly encourage a visit whether you are religious or not!  I’d go back in a heartbeat.  Floating in the Dead Sea was an experience not to be missed, and there’s so much more to Jerusalem I’d like to explore.  I didn’t get to visit Ein Gedi (David’s hometown) and would love to spend more time at the Holocaust Museum (also a must visit), and I’d love to explore the ruins at the City of David.

Our J-Town tour was on a Friday, ending just at the start of Sabbath.  It was a magical time to be at the Western Wall, but I have to say … women get the raw end of the deal!

The men had 3/4’s of the wall and a party, the women crowded together to say prayers. 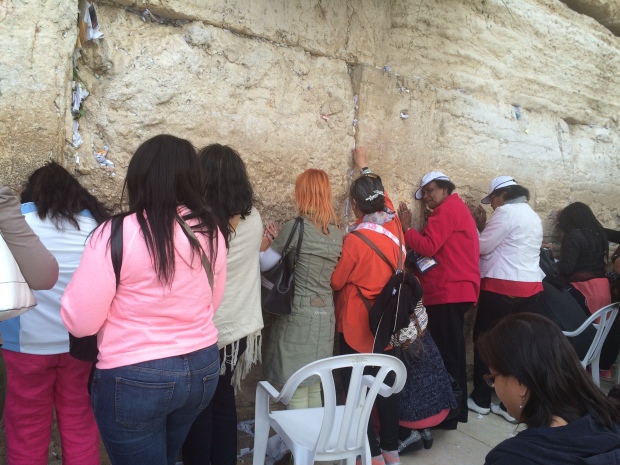 Families off to prayer, the Roman Cardo (columns from 70BC), and the Jewish Quarter.