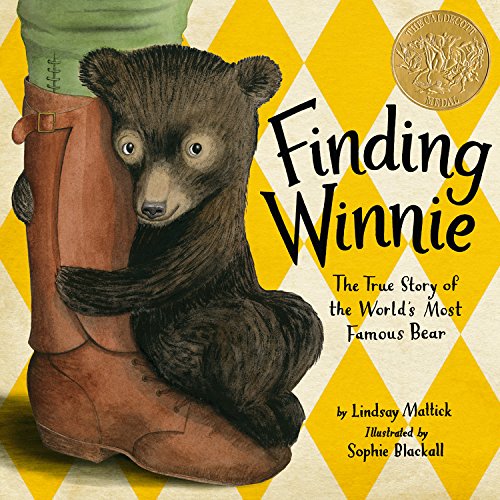 Our daughter is at the age when she is constantly asking us for the story behind things and whether things are “real.” Is Santa real? Unicorns real? Fairies? I haven’t quite figured out how to respond. Do I destroy her sense of wonder and fantasy or do I help her distinguish between fact and fiction? Usually I just mumble some noncommittal answer and try to change the subject. So imagine my pleasure when she asked if Winnie the Pooh was real and I actually had an answer for her — based on a book that had just been released. Finding Winnie was written by the great granddaughter of the man who purchased and named the bear who later become the inspiration of the Winnie the Pooh books. The true story is pretty amazing. Henry Colebourne was a Canadian soldier and veterinarian with the Canadian Infantry brigade in World War 1. He rescued Winnie by purchasing her at a train station on his way to basic training. She had been caught by a trapper who had shot and killed Winnie’s mother. Colebourne took the cub and named her Winnie to remind him of his home, Winnipeg. Winnie because the mascot of the Canadian Infantry Brigade and traveled with them to Europe. Colebourne dropped her off a the London Zoo on their way to France so they could care for her.

It was at the London Zoo where 5-year old Christopher Robin and Winnie met. You can read more about the history of Winnie and see pictures of her, here.

Finding Winnie won the Caldecott medal this year and it is truly one of the most beautifully illustrated books I have come across. It’s targeted toward children in K-3. What’s wonderful about the book is that it also contains real photos and copies of letters and other historical documents. E reviewed the book and it’s one of her new favorites. Here is her review:

Me: What did you think of the book?
E: I liked it a lot.
Me: What did you like about it?
E: I liked that Winnie found and owner and that it was about Winnie’s real life.
Me: What was your favorite part?
E: When Winnie finally found a home and met Christopher Robin. I liked that Harry (sic) was really nice to the bear.
Me: Was there any part you didn’t like about the book?
E: Yes, when they were fighting (E is referring to the fact that part of the history involved them going to war).
Me: What did you think about all the photos in the back?
E: I liked them a lot because they showed you the real life bear.
Me: Did everyone look like how you pictured in your mind?
E: No
Me: How were they different?
E: I thought they were going to have color (the photos are black and white photos).
Me: How many stars do you give it out of 5?
E: I give it 5 and a half

I highly recommend this book. E loved it and was so excited to learn the history of Winnie the Pooh that she told immediately ran in to her daddy to tell him the true story of Winnie. Not only is the book beautiful but it’s a nice way to introduce some history and to discuss the ways in which stories are created.

Want to try it for yourself? You can find your copy here: Finding Winnie: The True Story of the World’s Most Famous Bear.