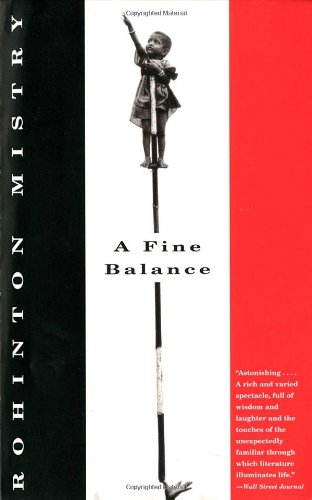 It’s been a while since both Book Worm and I have given the same book 5 stars. We are both fairly stingy with our 5-star ratings. So when a book comes along that gets 5 stars from both of us, we get very excited to share it with you. See why we thought it was so good and let us know if you loved it too!

Synopsis (from Good Reads): With a compassionate realism and narrative sweep that recall the work of Charles Dickens, this magnificent novel captures all the cruelty and corruption, dignity and heroism, of India.

The time is 1975. The place is an unnamed city by the sea. The government has just declared a State of Emergency, in whose upheavals four strangers–a spirited widow, a young student uprooted from his idyllic hill station, and two tailors who have fled the caste violence of their native village–will be thrust together, forced to share one cramped apartment and an uncertain future.

As the characters move from distrust to friendship and from friendship to love, A Fine Balance creates an enduring panorama of the human spirit in an inhuman state.

Book Worm’s Thoughts: 5 Stars. I was immediately drawn into the stories of the 4 central characters and loved the moves back and forwards in time as we learned what had bought them all to the same place. At points in the story I found myself wanting to shout at one or other of the central characters to tell them to be careful, or to be more understanding.

This is a novel of highs and lows. The highs come from finding and maintaining friendships while the lows come from the government “Emergency” and the laws and restrictions they put on the ordinary people. The novel does contain scenes of torture and these are distressing but not overplayed, no-one’s life is safe the poor least of all and this leaves an air of oppression over the whole novel. As a reader I was waiting for the next disaster to strike, while hoping that this time at least things would turn out for the best.

Jen’s Thoughts: 5 stars and a heart. This was one of my favorite books that I read in 2015. It won the Man Booker Prize in 1996. I generally love Indian literature and this was no exception. I found it to be extremely well-written and beautifully emotional. The notion of balance was central to the novel and I loved the ways in which events played out to perfectly reflect the idea that many things in life are a fine balance.

We want to hear from you! Have you read this book? What did you think? Have you read any others by Mistry? Which books would you recommend?