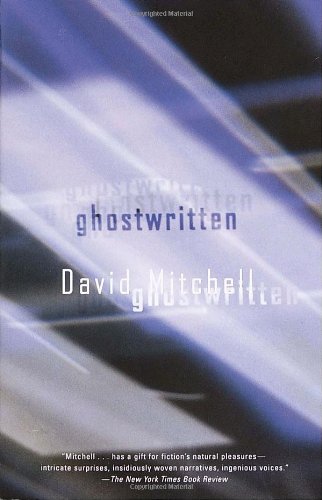 I’m just going to go ahead and acknowledge that David Mitchell can do no wrong in my eyes. At the risk of sounding like a broken record, I love his writing and, by extension, I love him. Many of you know that after reading Cloud Atlas I had avoided reading his other books because I didn’t want to be disappointed. My co-blogger Book Worm convinced me to keep going, however, and I’m glad she did. Here’s what I thought of Ghostwritten:

Ghostwritten is David Mitchell’s debut novel. In typical Mitchell style, it is comprised of several intersecting narratives that build upon each other to create a stunningly original and complex work. The novel consists of 10 chapters that read like short stories but that are connected in such a way that each progressive chapter contributes to a greater understanding of the conclusion. Chapters takes their titles from the location in which they are set and each one presents a different character and viewpoint. We follow the stories of a terrorist cult member in Okinawa, a record shop salesman in Tokyo, a corrupt British financial lawyer in Hong Kong, a female owner of a tea shack in China, a non-corporeal entity in Mongolia, an art thief in Petersburg, a musician in London, a female physicist in Ireland, and a late-night jazz DJ in New York who is broadcasting the potential end of the world. The final chapter then returns to the point of view of one of the original nine characters from the preceding chapters.

There are threads throughout each story that link the lives of the book’s various characters. These threads start to come together in greater frequency as we move toward the conclusion when some (but by no means all) questions are answered. The novel is a blend of genres and while some chapters seem bizarre, they are grounded in the plausible.

Ghostwritten is now my second favorite of his books after Cloud Atlas. The two are actually fairly similar, although Cloud Atlas is more ambitious for its alternating time periods – time in this book moves forward chronologically (with a few exceptions). It’s hard to believe that this is a debut novel because it is so complex and well-developed. I love Mitchell (have I mentioned that already?) for the ways in which he develops rich characters and complicated plots. He is one of the few authors I have come across that has been able to write characters of different genders, ages, and nationalities in a completely genuine and believable way.

Reading this book is like trying to piece together a puzzle. It’s an experience. The writing is fabulous the details connecting his narrative threads are pure genius. As we’ve mentioned previously, Mitchell views his various books as pieces of a larger work. Several Cloud Atlas characters make their first appearance in this novel (I’ll leave it to you to find out which ones but one of my favorite Cloud Atlas characters shows up here). Now that I’ve read several (Thousand Autumns, Bone Clocks, Cloud Atlas and Slade House), I can see some of the threads that are running throughout the novels indicating that each novel may be a chapter in a larger work.

But what is it about, you ask? It can be hard to summarize the plot of a Mitchell novel. There is a passage in Ghostwritten where a young woman is reading War and Peace and a character from a later chapter asks her what the novel is about. It goes like this:

Ghostwritten (and his other novels) is about why things happen they way they do. It is about people, ordinary and extraordinary, good and evil and how their lives are connected. And finally, it’s about chance versus fate and how seemingly random events are important and lead to significant occurances.

First sentence: Who was blowing on the nape of my neck?
Last sentences: Who is blowing on the nape of my neck? I swing around – nothing but the back of the train accelerating into the darkness.
Favorite passage: The last of the cherry blossom. On the tree, it turns ever more perfect. And when it’s perfect, it falls. And then of course once it hits the ground it gets all mushed up. So it’s only absolutely perfect when it’s falling through the air, this way and that, for the briefest time…

Want to try it for yourself (and you should)? You can purchase your copy here: Ghostwritten

Have you read this book? What did you think? Which are your favorite of his books? Least favorites?